On Sunday, October 24th, Dolly Parton will be closing the evening with a special acoustic performance with her long time musical director and producer Kent Wells on guitar, to help raise money and awareness for the Susan G. Komen Breast Cancer Foundation. The Kiss Breast Cancer Goodbye event will be taking place at the Country Music Hall of Fame CMA Theater. The intimate one-hour performance will highlight the international superstar’s career singing all her biggest hits with anecdotes we all come to expect and love.

“I am thrilled to be performing some of my greatest hits with my friend Kent for such a worthy cause,’ says Dolly Parton.  “Breast cancer has touched every single one of us in some capacity, so I am thankful for Donna Wells asking me to be part of this event. I hope we can raise some good money and help fight this horrible disease, so bring your checkbooks,” elaborates Dolly.

Dolly Parton is a country music artist active since the 1960s with the release of her debut album, Hello, I’m Dolly. Her career has only skyrocketed from there with many albums and releases through the 1970s and 1980s. She’s most known for: “9 to 5,” “Jolene,” “I Will Always Love You,” and “Coat of Many Colors.” She also contributed 1 million dollars to help with the release of the Covid-19 vaccine.

The American Cancer Society Making Strides Against Breast Cancer® (MSABC) is a national movement. Fundraising events range from large-scale traditional walks to unique local experiences and celebrations. Making Strides has united communities, companies and individuals across the country in the fight to end breast cancer for more than two decades. The organization has known of Michele and her fight since 2002, when she first started participating in their events. Both Michele Alter and Brittany Zinn believe in MSABC’s commitment to create a future that’s free from breast cancer. “As we look to the road ahead, we are more determined and more inspired than ever before. It will unite Broward County communities to honor cancer survivors and caregivers touched by the disease and raise awareness and funds for a world without breast cancer,” said Trudy Spence. In years past, this event has raised over 700,000 dollars, which went towards funding breast cancer research and programs geared towards both men and women. At this time, the event will move forward in person, but it will keep federal, state, and local health guidelines in mind. As the fall season approaches, event-based decisions may be made to best meet the health and safety needs of everyone involved. Michele and Brittany hope to get as many people signed up to help raise funds. “Between now through October, people can fuel the fight against breast cancer by fundraising. It’s as easy as downloading the American Cancer Society FUNdraising App, which will allow you to register for the October event and ask for donations via email, text and social media,” said Michele Alter who was first diagnosed with breast cancer at the young age of 32.

For many, being diagnosed is a life changing experience, and Michele believes that cancer lit a fire in her soul. Early during her treatment, she decided that she would not only beat cancer, but she would also volunteer and help The American Cancer Society fund a cure. “They were there for me when I needed them the most, so I feel blessed that I am here today ready and able to co-chair this year’s Making Strides/ Broward event.” Michele believes in the programs, because they were the only thing that helped her see the light during those moments of darkness. Brittany comes from an automotive family that happens to also be highly philanthropic. Her father, Craig Zinn, encourages everyone in his company to give back to the community. Despite wearing many hats, Brittany was eager to serve as co-chair for this year’s event to honor the memory of Ingrid, who was like a mother to her. “I’ve seen what breast cancer does to a person. Since I was young, Ingrid kept the true depth of her struggles from me. Had I known, I would have been there for her, much like The American Cancer Society was for Michele,” said Brittany.

According to the American Cancer Society journal, a Cancer Journal for Clinicians, there will be an estimated 1.9 million new cancer cases diagnosed in 2021 and 608,570 cancer deaths in the United States. Given the pandemic, it’s believed that people with active cancer may be more susceptible to COVID-19, because of their impaired immune system. For that, the Broward chapter wants to ensure everyone that even if they cannot attend in person, the success of this event will depend on enthusiastic individuals who commit to raising funds, in addition to generous donors who will support those participants.

Click HERE to join the walk by signing up as an individual or team. Be sure to download the app to your phone and link the dashboard to Facebook. Fun Fact: Those that connect their fundraiser to FB, raise seven times more money. 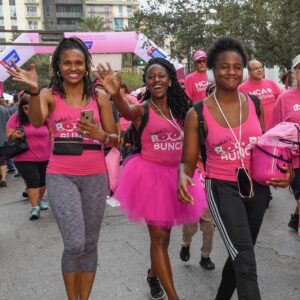 Participants at the 2019 event

October is National Breast Cancer Awareness Month and there are many ways to support the cause this month. This annual campaign is held to both spread awareness and raise money for the cause.

The website for the National Breast Cancer Foundation provides many resources to help with this cause. Although things are challenging for everyone this year, this important organization has been fighting for women since 1993 and continues to thrive thanks to its supporters.

New this year on the foundation’s website anyone is able to designate a donation to one of four specific causes. Donations are being accepted to screening, education, support and the general fund.

The screening fund allows the National Mammography and Patient Navigation programs to provide free cancer screenings and mammograms to those in need; this helps remove barriers in the cancer care system. By donating to education, more women will be given resources and education to detect breast cancer early and lower their risk. To help women that have been diagnosed, donating to the support services will help them gain resources and support they need to heal. This money goes to funding HOPE Kits, Metastatic Retreats and Support Groups.

If you are unsure which program you would like to donate to, giving to the general fund allows the National Breast Cancer Foundation to designate your donation to the area they believe needs it most. You can even donate in honor or memory of someone in your life that has been impacted by breast cancer.

Available for download from the foundation is the Breast Problems That Aren’t Breast Cancer ebook. This free resource will help women recognize common problems versus breast problems that need to be looked at by a professional.

Breast cancer screenings are important for women to get regularly so they can detect problems from the start. The United States Preventive Services recommends women ages 50 to 74 get screened every two years, while women 40 to 49 should talk to their doctor about getting screened sooner if they are at higher risk. Self-examinations are recommended for all women to check that there is no concern.

The American Cancer Society has been hosting Making Strides Against Breast Cancer for over twenty years. This walk helps fundraise for research and support for breast cancer patients. Even though the ongoing coronavirus pandemic has canceled many events, the walk will still be taking place virtually. Donations are still being accepted and people everywhere will be coming together virtually to support the cause.

Ways to volunteer with the National Breast Cancer Foundation are being moved virtually as well. This is a great way to give back in October instead of donating. People everywhere are helping to pack HOPE Kits for women in treatment and write encouragement cards to put in the kits. There are many ways to help in the month of October to spread awareness about breast cancer and give hope to those in need.

The non-profit organization, Susan G. Komen for the cure, also supports women with breast cancer and their families. On their website, women can find information, resources and assistance to help them with their journey. Founded in 1982 by Nancy Brinker, is the largest breast cancer organization in America.