K-12 musical instruction and performances may look different this fall, but the beat will go on thanks to creativity and music-making technologies, says a Purdue University expert.

“There are so many online tools out there that music educators can use to bring students together during the COVID-19 pandemic,” said Christopher Cayari, assistant professor of music education in the Patti and Rusty Rueff School of Design, Art, and Performance at Purdue. “One option is for programs to host online concerts or performances through the recording and mixing of virtual ensembles and individual performances.”

Platforms like Soundtrap by Spotify and Protools are great resources for sound editing. Other softwares like Flipgrid and Adobe Premiere do video editing, while Acapella by PicPlayPost and BandLab are compilation apps available for mobile devices to create musical productions amid the pandemic. Cayari encourages music educators to experiment with these softwares to make music with their students, and the skills they develop while distance learning can then be carried into physical classrooms after the pandemic is over.

“Putting together a virtual ensemble can be difficult, but I have seen many tech-savvy educators or sound engineers helping music educators create virtual performances,” Cayari said. “Students can also collaborate with one another to create anything from karaoke videos to vlog projects. The great thing about technology is that students can collaborate with others without geographical restraint.”

For the last 10 years, Cayari has researched online music making and virtual performances, focusing most of his attention on YouTube and how the platform has changed the way people create, consume and share music. According to Cayari, online music-making projects, research, technologies and literacies occur within three dispositions:

This week, a special issue of the Journal for Popular Music Education, co-edited by Cayari and Janice Waldron from Windsor University in Ontario, Canada, was released that focuses on learning, performing and teaching, which includes international research about how music teachers are using the internet to teach students.

Purdue University is a top public research institution developing practical solutions to today’s toughest challenges. Ranked the No. 6 Most Innovative University in the United States by U.S. News & World Report, Purdue delivers world-changing research and out-of-this-world discovery. Committed to hands-on and online, real-world learning, Purdue offers a transformative education to all. Committed to affordability and accessibility, Purdue has frozen tuition and most fees at 2012-13 levels, enabling more students than ever to graduate debt-free. See how Purdue never stops in the persisten

Vocal/pop quintet Citizen Queen released their cover of En Vogue’s “Free Your Mind,” as well as the accompanying music video, today. The video shows the girls performing the cover on RCA Records’ Pride livestream, which was presented in partnership with the Human Rights Campaign. Check it out here.

“Free Your Mind” follows the group’s most recent covers, including “Slow Burn” by Kacey Musgraves, a medley of Tierra Whack’s Whack World (“Flea Market,” “Fruit Salad,” “Hungry Hippo,” “Hookers,” and “Pretty Ugly”), and Billie Eilish’s “bad guy.” The video for their take on Daniel Caesar and H.E.R.’s “Best Part” features live stage and behind-the-scenes footage from the group’s 2019 summer tour in support of Pentatonix. They performed in stadiums around the US and Canada, making stops at New York City’s Madison Square Garden and The Forum in Los Angeles. Watch Citizen Queen’s “Evolution of Girl Groups” video, which has garnered over 18 million views on YouTube.

Listen to Citizen Queen’s cover of “Free Your Mind” here.

Three-time Grammy® Award-winning and multiplatinum selling artists Pentatonix have announced A Pentatonix Christmas Tour, which kicks off in Chicago on December 3rd with 3 nights at The Chicago Theatre and concludes just before Christmas with 3 shows at New York City’s Beacon Theatre. The concerts will be the group’s first to feature songs from their 3 hugely successful holiday albums. To coincide with the tour, Pentatonix has also announced a deluxe version of 2016’s platinum-selling, chart-topping album – A Pentatonix Christmas. A Pentatonix Christmas Deluxe will be released on October 20th via RCA Records and is currently available for pre-order on Amazon (http://smarturl.it/APTXmasDlxAmz).

Tickets for A Pentatonix Christmas Tour are available via a 24 hours Patreon presale (for Patreon members) beginning August 23rd at 10am. Holiday VIP upgrade packages will be available first to Patreon members during their exclusive pre-sale, then go to the general public beginning Friday, August 25th (www.ptxofficial.com/vip). Ticketmaster will also run a presale on August 24th from 10am – 10pm. Tickets are officially on-sale on Friday, August 25th at 10am local time. For ticket information, please visit www.PTXOfficial.com

Additionally, Pentatonix has announced that they will return to NBC with a brand new holiday special featuring live performances from the group and so much more. Last year’s “A Pentatonix Christmas Special” drew more than 10 million viewers across two airings on the network. An airdate for the special will be announced at a later date.

In just six years, Pentatonix has sold more than 6.4 million albums (in total consumption) in the U.S. alone. They have won three Grammy Awards, received a Daytime Emmy nomination and performed for hundreds of thousands of fans at their sold-out shows across the globe. Their YouTube channel boasts more than 13.5 million subscribers, yielding over 2.6 billion video views, and their 2015 self-titled album has been certified gold after debuting #1 on Billboard’s 200.

Additionally, seven of their albums reached the top 10 on Billboard’s 200 chart (2 at #1) and received multiple RIAA certifications for multi-platinum, platinum and gold selling albums and singles. In 2015, the group released its first tour documentary – On My Way Home – and appeared in the feature film Pitch Perfect 2.

Earlier this year, the group released PTX Vol. 4 – Classics which features their Grammy Award-winning performance of “Jolene” with Dolly Parton, as well as an arrangement of the John Lennon classic “Imagine.”

Three-time Grammy® Award-winners and multi-platinum artists Pentatonix release the music video for their cover of Robyn’s “Dancing On My Own” today. Additionally, the song is available now on all digital retailers via RCA Records.

Pentatonix will be kicking off their summer tour at the Ohio Expo Center & State Fair on August 5th to a sold out audience. The multi-city tour is nearly sold out in all cities and will on September 3rd at the Champlain Valley Exposition. Tickets are still available here: Pentatonix Tour Official

In just five years, Pentatonix has sold more than 6 million albums in the U.S. alone.  They have won 3 Grammy Awards and performed for hundreds of thousands of fans at their sold-out shows across the globe.  Their YouTube channel boasts close to 13.5 million subscribers, yielding over 2.6 billion video views, and their 2015 self-titled album has been certified gold after debuting #1 on Billboard’s 200.

In October 2016, Pentatonix released their third holiday album – A Pentatonix Christmas – which has been certified platinum, spending two consecutive weeks atop Billboard’s Top Chart as well as reaching #1 on iTunes and Amazon. The album includes the group’s arrangement of the Leonard Cohen classic “Hallelujah,” which reached #2 on the iTunes singles chart, generating 20 million video views in its first week (more than 130 million total) and has since been certified gold.  The group also starred in their first-ever network special – A Pentatonix Christmas Special – which aired twice on NBC and garnered 13 million views across the two airings and featured music from all three Pentatonix holiday albums.  A Pentatonix Christmas follows 2014’s 2x Platinum That’s Christmas To Me, which features the group’s Grammy® Award-winning arrangement for “Dance of the Sugar Plum Fairy.”  In 2015 the group released its first tour documentary – On My Way Home – and appeared in the feature film Pitch Perfect 2. 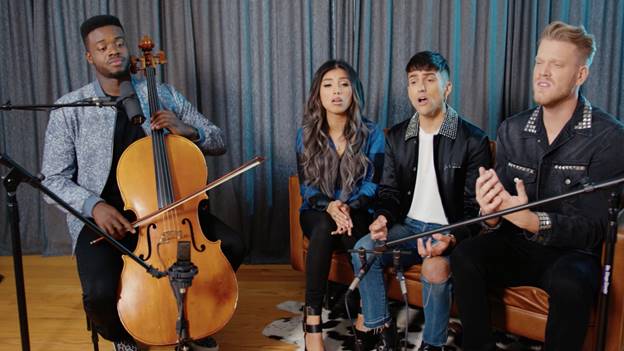