Nearly 50 years after The Ed Sullivan Show wrapped its final episode and charmed TV viewers for the final time on Sunday night June 6, 1971, it officially joined the streaming universe to live on forever on June 12 with the UMe agreement with SOFA Entertainment Inc. for the global digital rights to The Ed Sullivan Show, which encompasses the influential television program’s historic 23-year primetime run on CBS and marks the first time that Ed Sullivan Show performance and guest segments are officially available in their entirety across streaming services worldwide.

Among the voluminous gems in this vast catalog are iconic clips that have primarily only been available in excerpted versions on EdSullivan.com or as low-resolution digital “bootlegs.” Scores of rarities will also be available digitally for the first time and fans can visit The Ed Sullivan Show’s official YouTube channel and EdSullivan.com for more information.

The Ed Sullivan Show is the most popular primetime variety show in American history. For nearly a quarter century, Ed Sullivan hosted the greatest array of talent on television, including The Beatles, The Rolling Stones, Elvis Presley and Motown artists such as The Supremes, The Temptations and The Jackson 5. Every Sunday night at 8pm on CBS from 1948-1971, The Ed Sullivan Show showcased a wide variety of pop culture from the worlds of music, comedy, novelty and much more.

Oxygen, the destination for high-quality crime programming, debuts “Manson: The Women”on Saturday, August 10 at 7pm ET/PT. To understand exactly how one of the most daunting madmen in history charmed his way into the lives of the women who formed his family, this compelling two-hour special takes a deep dive into their psyche through the lens of the counterculture movement that swept the 1960s. Lynette “Squeaky” Fromme, Sandra “Blue” Good, Catherine “Gypsy” Share, and Dianne “Snake” Lake recount their experiences with Manson, life on Spahn Ranch and their leader’s eventual decent into madness. Their candid, in-depth interviews provide a unique perspective on what it meant to be a part of the infamous Manson family and vividly depict the collapse of a freewheeling family whose leader groomed a few of its own to commit murder. For a sneak peek,

Nearly 50 years since one of the most notorious killing sprees in America rocked the nation, questions surrounding the illusive Manson Family remain. Perhaps most daunting was the notion that Manson could incite such bloodshed without physically executing his own plan. In an era where free love fueled the proliferation of counterculture communes, most of Manson’s loyal followers were young women from middle-class backgrounds whose own home lives did not bring them solace and, instead, pushed them to find acceptance elsewhere. This, coupled with Manson’s inflammatory us-vs-the world teachings, ignited a sense of belonging within the women and inadvertently paved the way for their leader’s stronghold. Input from former legal analyst and federal prosecutor Lis Wiehl, as well as additional researchers and experts on the family, breaks down the level of control and manipulation – psychological, physical, emotional – that took over the lives of these vibrant young women. 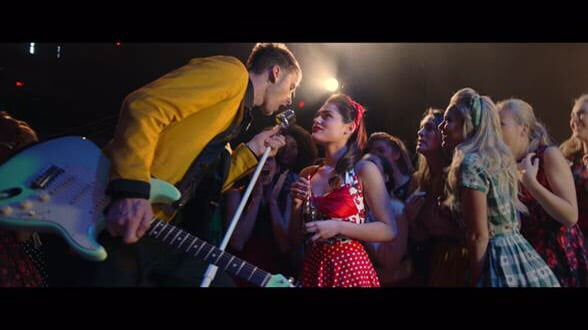 Cleveland native Machine Gun Kelly releases a nostalgically vintage based video for his new single “ Let You Go.” Reminiscent of a classic 1960s variety show, this visual gives fans even more reason to tune in to catch more of MGK. While the rapper released his third studio album bloom in May, it is now available on vinyl HERE. bloom features guest vocals from James Arthur, multiplatinum recording artist Hailee Steinfield and rap trio Migos. 2017 seems to be ending on a high note for the “Bad Things” singer who was recently named the face of John Varvatos’ 2017 fashion campaign.
Machine Gun Kelly bloom eAlbum