“I first met Frank Watson in Harlem in the early days of the 2010s, I can’t recall exactly the year, but I do recall his and others like him, an ambition trending group that would change how thousands would see themselves and attempt to define a new world, even for me. It was the breaking days of the New Harlem — young energy and freedom rushed in like a tsunami.

Frank had ideas about parties and asked me a lot of questions on how to do it in Harlem and NYCwide. I had spent a few years serving as a development advisor to an emerging magazine that expressed fashion freedom and black gay pride as well as help to create the first major black comedy club in the 1990s, located in Harlem, that created substantial new opportunities that formerly was only open to a few blacks at a time. More of my story later in another article.

In the pic above, it was at one of a handful of people at Frank’s first party venture that happened to take place in Harlem, the DJ Brian Henry, on my right, a mentee who had invited me, was a recent college graduate working at Verizon and living in Harlem. Brian is now the famous B-Hen, hosting amazing block parties all across the nation and performing abroad. Back to Frank. I’ll never forget that conversation that night and the countless others, his humility, charm, and drive to make other people enjoy their lives was evident. He had a soul that couldn’t be broken and was a strong architect of much needed ventures and events that made pride beyond one day, month, or a season. He gave life to a new generation that chose to be dominant in popular culture and not in the shadows. May God grant him peace. He was a king.” — William Allen

If you’re coming from Little Rock on the day of, please begin your drive by 9AM in order to arrive around 11AM.

If you drive through Pine Bluff and Star City, which is via Highway 425, you will have cell reception the entire trip.

If you choose to drive there via Highway 530 South, you will NOT have cell reception for at least an hour of the drive.

Inside The Village Voice.

Earlier this month, 360 had the opportunity to sit down with the award-winning community activist William Anthony Allen. After many years of serving Harlem as a community leader and on its District Council, Allen is exploring the possibility of running for City Council serving the 9th District.

Harlem has long been a beacon of Black culture, community, and heritage since the Harlem Renaissance of the 1920s. Growing up in the 70s and 80s, the Harlem that William Anthony Allen knew was one of unity, familiarity, and freedom. According to Allen, “Crack cocaine came and killed all that. It stopped people from going to the community. It created mistrust. It changed how people participated politically and how they saw themselves. A great number of the working class and middle class of Harlem began to look at other options.” Allen describes his childhood in Harlem as poor but centered in the community, “people were so loving like they were aunts and uncles, but they really were not a blood relationship. The way they treated you, felt like family.” He watched as crack cocaine and the crisis that followed attack the infrastructure of Harlem and divided its community, giving way to gentrification. “Black people don’t own the businesses in their own neighborhood anymore and young people say that can’t afford to come back to Harlem,” he says. Allen has completed housing and community development efforts in New York, as well as health care and social services proposals on a local, state and federal level. His efforts have always been lead by a desire to uplift the community and uphold the “great legacy” of Harlem, “particularly for African Americans.”

But what are his plans? How does Allen intend to use his experience in the community to serve them at a City Council level? He told 360 he would begin by “sitting down with parent leaders, senior citizen leaders, youth leaders, and really talk about mapping it out in terms of how do they see the future of this community, what do they want from it, and make that the blueprint.” He calls for the people of Harlem to define their own community and make their own decisions, with himself as a representative of their interests. “I’m going to be fighting very hard to address the housing inequities and disparities, helping to lower the cost of housing,” he told 360, “making sure that folks that really want to make a contribution to the life of this city can afford to be here.”

Allen lamented that a particular program that had been around for nearly fifty years, the Addicts Rehabilitation Center (ARC), has closed; “without those services, gentrification moves us all out.” Allen is fighting to get these programs reestablished, but he specifies that black and brown people should be running these programs for the community, “I want to make sure that the people that are running the program are culturally correct.”

In his youth, William Anthony Allen attended Fordham University in the Bronx where he was the first non-white person to serve as Vice President of the Student Council. Later, he transferred to CUNY where he was the Editor-in-Chief of the school newspaper. Now, he is the founding member of a local charter elementary school. He recognizes that education is of the utmost importance. In the City Council, Allen plans to create a network through Historically Black Colleges. “We need to make learning and knowledge sexy,” he says, so everyone, regardless of their circumstance can step up and participate in the betterment of their community.” Of his current efforts, he says, “I’m organizing a network of black influencers to address crisis issues that affect black people across the country.” These crisis issues include police relations, employment discrimination, gentrification, and inadequate schools.

For himself, Allen’s goal is, “to be known as the guy who brings everybody together to have dialogue and then create action.” He says to not only the Black community, but to the youth of Harlem and the LGBTQ+ community, “Tell me how I can support you to have a strong voice.”

“Harlem represents a great legacy, particularly for African Americans. And our entry, not only here into the city but what we have done for the nation,” says Allen, “We need to leverage that.”

Check out his latest article inside New York County Politics. 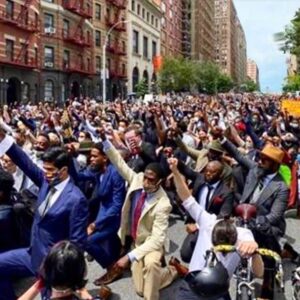 Harlem Democratic District Leader William Allen encourages others to take a knee during a march in honor of George Floyd. Black men march through Harlem, pick up hundreds of others along the way to insure justice by claiming power.