Wrinkles are the creases and lines on our skin. They are particularly noticeable around our mouth, eyes, and neck. Wrinkles are caused by various factors such as advancing age. As we age, the skin loses its elasticity because of reduced elastin and collagen. Exposure to the sun’s ultraviolet light and smoking too can cause wrinkles. repeated facial expressions like squinting, smiling, and frowning can make them worse.

Wrinkle formation is usually seen after 40 years of age. But sometimes, they appear earlier than expected. So how can we make these wrinkles go away so that we can keep looking young? This is now possible, thanks to advances made by modern science. Botox and Dysport are two medical interventions that can remove these wrinkles and make your skin look young and pretty again.

They are both popular throughout the world. Naturally, the question arises – Dysport Vs. Botox – which is better?

What Is the Difference Between Dysport and Botox?

Botox and Dysport are both neurotoxins that work by blocking muscle contractions, thereby preventing wrinkle formation and curing the ones that are already there. Both these injectable cures are derived from the botulinum toxin in small quantities. They are both used for treating spasms caused by neurological issues and some other medical disorders, but their most popular use is in the treatment of facial wrinkles.

There are however some differences between them as well. The main difference is the amount you will need for the cure. For example, Botox is less diluted compared to Dysport. This means, Dysport requires more units of treatment.

Dysport will also react differently after the injection is pushed. It will spread to a larger area. Botox, on the other hand, spreads less, which means Botox treatments are usually more precise. Botox is often the better choice for the skin around your eyes as well. You can choose Dysport if you want to cure a larger section of your skin.

Both Botox and Dysport are considered safe. This is why the US FDA has approved both these drugs for treating facial wrinkles. Botox received the approval in 2002. Dysport got it much later in 2009 but this product was popular in Europe for a long time before that.

This is a neurotoxin that is developed from a toxin – the bacterium clostridium botulinum. In controlled amount, this toxin can be very effective for cosmetic treatments. However, the toxin can be dangerous if it is not used correctly, which is why you must always go to an expert therapist who has a lot of experience in offering this cure. With the right plastic surgeon or dermatologist, Botox can be a miracle cure.

This filler blocks the nerve signals from the brain to the targeted muscles. As a result, the muscles won’t be able to move freely, which makes them relaxed and softer. The lack of muscle movement in the targeted area will eventually remove your forehead lines and wrinkles for some time.

Follow-up treatments will be required. Your plastic surgeon or dermatologist will tell you when you should visit again.

Other businesses have been trying to come out with their injectable cures since the success of Botox. Dysport was already popular in more than 60 countries. It eventually received the FDA approval in 2009. It has since then also proved to be an effective, non-surgical cosmetic cure. 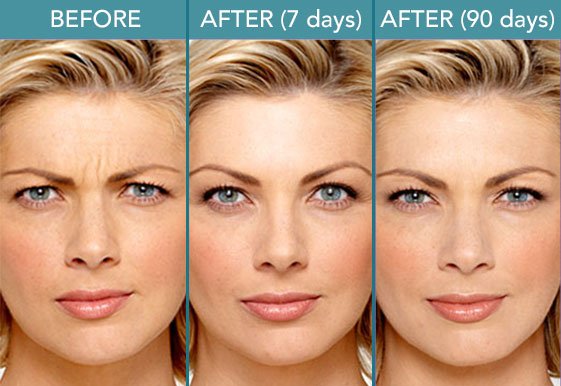 Dysport also uses the Botulinum Type A toxin like Botox and works in the same way. However, it reduces the lines, which mostly affects the glabella, or the part of the skin between the eyebrows. Such lines on your face can extend vertically, upwards, and also towards your forehead. These lines are usually noticed when you frown. The naturally occurring glabella lines can get more pronounced also when you are relaxed. This is because, protein fibers of the skin lose its elasticity as we age.

Dysport is best applied for those with severe or moderate facial wrinkles. In other words, it will not be very effective if your glabella lines are mild. It is best to approach a board-certified dermatologist to determine the status of your glabella lines and to find out whether should get Botox or the Dysport facial cure.

What Lasts Longer Dysport or Botox?

They both last for about the same time, which is between 3 and 6 months, usually. After this, you have to visit the therapist again for a follow-up cure because gradually, the muscles that had been paralyzed will come back to life. How long the result will stay for you will depend on several factors, such as the condition of your skin before the session, size of the treatment area, and the dosage administered. The total dosage you will require is also likely to come down with each session.

Both these neurotoxin injections also have around the same cost, which is usually $400 for each treatment session. But remember, it can be different in various clinics and from person to person.

What Age Should You Get It?

We begin to have facial lines and wrinkled skin for the late 20s because the skin’s collagen production will start to go down after we are 25 years of age. Anyone above the age of 18 years can get these cosmetic cures. So, the early 30s is a good time for these cures. The skin condition will only worsen if you delay. You will then require a higher dosage. It may also take you more time to get the result, which means more sessions.

Dysport, Botox are both good and safe. However, Botox treatments have often been proved to be better for most people.

Protect yourself from melanoma without becoming deficient in vitamin D

Don’t be so quick to overlook concerns around melanoma just because it’s often viewed as preventable. Melanoma is one of the most common cancers and the deadliest form of skin cancer. However, there is a conflict between how we prevent melanoma and how we ensure we are getting enough vitamin D. Sun exposure is the main source of this essential vitamin, but it’s also the primary culprit in the formation of melanoma. With May being Melanoma Awareness Month, it’s time to take notice and learn how we can protect our skin while still absorbing enough vitamin D.

Cases of melanoma have been rising over the last few decades, especially among young adults, as it’s the most commonly diagnosed cancer among people aged 25 to 29. According to the Melanoma Research Alliance, one person dies from melanoma every hour of every day. The American Cancer Society reports that the risk for getting melanoma is approximately 2.6% (1 in 38) for whites, 0.1% (1 in 1,000) for Blacks, and 0.6% (1 in 167) for Hispanics. While fair skin poses a higher risk, darker complexions are also at risk.

Melanocytes are cells that produce melanin and give skin its brown or tan color. It’s when melanocytes start to grow out of control on the skin’s top layer that cancer can develop and then spread to other parts of the body. Usually appearing as a brown or black spot or mole, melanoma is most commonly found on the chest and back for men and legs for women. It’s best not to ignore any irregular spots you may find on your skin because this cancer can also appear in other colors or patterns. Exposure to ultraviolet (UV) light from the sun or tanning beds can damage DNA in cells and significantly increase the risk of melanoma. Early detection is important for effective treatment.

The importance of Vitamin D

Bone Health: Vitamin D and calcium work together to maintain bone health and density. Calcium cannot be absorbed into bones without the help of vitamin D. A vitamin D deficiency can result in bone softening, known as osteomalacia, and muscle weakness. Osteoporosis can also be associated with vitamin D deficiency due to the lack of calcium absorption. Both osteoporosis and melanoma affect older adults making it essential to couple melanoma prevention strategies with vitamin D supplementation.

Immunity: Recently, researchers have been investigating a possible link between vitamin D deficiency and the severity of COVID-19 symptoms. While this research is still in its infancy, scientists have been finding that low vitamin D status may result in the increased severity of symptoms and higher mortality rate. More research is needed in this area.

Depression: People with depression are more likely to have low vitamin D levels. A 2011 study found that women who ate more foods rich in vitamin D had a lower risk of depression than women who got less vitamin D in their diets. Vitamin D has also demonstrated the ability to improve the symptoms of depression.

The Recommended Daily Allowance (RDA) for vitamin D is 15 mcg (600 IU) for most children and adults up to the age of 70, according to the National Institutes of Health. Adults who over 70 need 20 mcg (800 IU) daily.

Tips for getting enough Vitamin D:

The sun may be the main reason for the increasing rates of melanoma, but it’s also our number one source of vitamin D. It is possible to protect yourself from developing melanoma and ensure that you are obtaining ample amounts of vitamin D to prevent the consequences of a deficiency.