The year 2016 marked the very first high-quality production for Mullin Estate Wines. His Doglio vineyard is close to the medieval hilltop town of Todi in Umbria, known as the green heart of Italy. The ancient viticulture tradition here traces back to the Etruscans who began growing grapes thousands of years ago. Made by third-generation winemaker Paolo Trappolini, the wines are bottled, labeled and packaged in the local cantina for shipment predominantly to the USA and the United Kingdom.

“Mullin Estate Wines combines my two passions: the art of the automobile and the art of winegrowing,” said Mullin Automotive Museum Founder and CEO Peter Mullin. “I’m thrilled to introduce these fine wines to the world so that car enthusiasts and wine connoisseurs alike can appreciate the inspiration behind each bottle.”

The youngest and most versatile of the family, the “little” Rosso Umbria is inspired by the 1930 Bugatti Type 46 Cabriolet—Mrs. Mullin’s personal choice. Best paired with simply-prepared red meat, pasta with ragout and roasted poultry, this red blend is full bodied with an intense flavor and smooth tannins.

Like the 1937 Talbot-Lago Type 150-C-S “Teardrop,” the Syrah Umbria is elegant, serious and powerful. Delicious with braised red meat, steaks and seasonal cheeses, this wine has a round and silky flavor composition with equally round and rich tannins.

Made with the best selection of grapes in limited quantities, Sangiovese is the leading indigenous grape of both Tuscany and Umbria. It is the crown jewel of the collection, much like its 1936 Bugatti Type 57SC Atlantic counterpart. With deep, warm flavors of plum, spices, dark chocolate and tobacco, this wine has good minerality and a very long-lasting taste.

The collection will be headlined by the 2018 “Best of the Best” winner, a 1936 Bugatti Atlantic 57SC, as well as other concours-worthy classics including a 1950 Talbot-Lago Type 26 Grand Prix, a 1963 Citroën DS19 Concorde and more

The Mullin Automotive Museum announced it will display seven French classics at various events during the world-renowned Monterey Car Week. Guests of the Rolex Monterey Motorsports Reunion, The Quail, A Motorsports Gathering and the Pebble Beach Concours d’Elegance will have a chance to see prized classics including the 2018 Peninsula Classics Best of the Best-winning 1936 Bugatti Atlantic 57SC, a 1950 Talbot-Lago Type 26 Grand Prix, a 1963 Citroen DS19 Concorde and more from the museum’s prestigious collection.

Since the Mullin’s inception in 2010, its mission has been to show and exhibit its cars to educate the public about twentieth-century French automotive styling and design. Monterey Car Week provides the ultimate stage for these French classics.

“Each year, we select some of the best motorcars to bring to the Monterey Peninsula,” said Mullin Automotive Museum Founder and CEO Peter Mullin. “Aligning with the museum’s mission statement, these classics should be enjoyed not only in an exhibit setting but also in shows around the world. We’re excited about this year’s showcase and hope passionate car enthusiasts in attendance will be equally ecstatic.”

The events and the automobiles to be featured are as follows:

The Rolex Monterey Motorsports Reunion will return to Laguna Seca Raceway and feature the world’s most historically significant competition cars, driven the way they were truly intended. Four cars from the Mullin will be featured at this year’s event and will be available for viewing both up close in the pits and roaring down the main straight.

Setting the pace will be a 1925 Bugatti 35C Grand Prix, which began as the first 35A to be imported to England. The car was later transformed into a 35C by former owner Dick Crosthwaite and marque expert Hugh Conway. In its original configuration, this car finished second at BARC Brooklands at a top lap speed of 103.22 mph driven by Christopher Staniland in 1926. The following year, it won the Brooklands Race and the Bugatti Cup, and subsequently was raced frequently in both Northern and Southern Ireland for several years with very successful results. Peter Mullin purchased the car in 1991 after Hamish Moffatt had completed its restoration in 1986.

A 1938 Talbot-Lago Type 26 SS Roadster will also make an appearance at the historic raceway. This Type 26 was originally designed by Figoni and Falaschi and alter updated by the Chappe Brothers. The car raced at Le Mans in 1939 before being put in storage for the duration of World War II.

Guests will also see another Mullin classic, the 1950 Talbot-Lago Type 26 Grand Prix, which helped developed the prestige of French racing and develop the reputation of international Formula racing worldwide. With its twin ignition and sleek tapered body, the car has top speeds of more than 166 miles per hour. Since acquiring the car 1992, Peter Mullin has driven it in vintage racing events all over the world.

The crown jewel of the Mullin collection, a 1936 Bugatti Atlantic Type 57SC, will be displayed on the rolling grasses of Quail Lodge & Gold Club at The Quail, A Motorsports Gathering. This Atlantic represents the first of only three models ever produced. Marked by riveted flanges on a blue, all-aluminum body, this particular Bugatti is the only surviving “Aéro Coupé,” a designation given to the first two cars that were mechanically very similar to the aerolithe. Delivered new in 1936 to Britain’s Nathaniel Mayer Victor Rothschild, third Baron Rothschild, the car has had only a handful of owners in its 80-year history.

As the world’s foremost Concours event, the Pebble Beach Concours d’Elegance will feature two Citroens from the Mullin collection. The first of which, the Henri Chapron-built 1965 DS19 Majesty, is one of only 27 models ever produced. Known for its higher and more angular roofline, the car was ordered by Rene Gaston-Dreyfus in 1964 with particular specifications including striking metallic paint and technologically advanced accessories. It will be a one-of-a-kind feature at the world-class event.

The second car to be showcased is the 1963 DS19 Concorde with its aerodynamic body and sophisticated hydropneumatic suspension. The classic also serves as an important example of elegant bodywork hand built by Chapron himself. One of 38 Concorde models ever made, the car was purchased by Peter Mullin in 2016 in Europe.

For more information about these cars and others in the Mullin Automotive Museum collection, please visit www.MullinAutomotiveMuseum.com 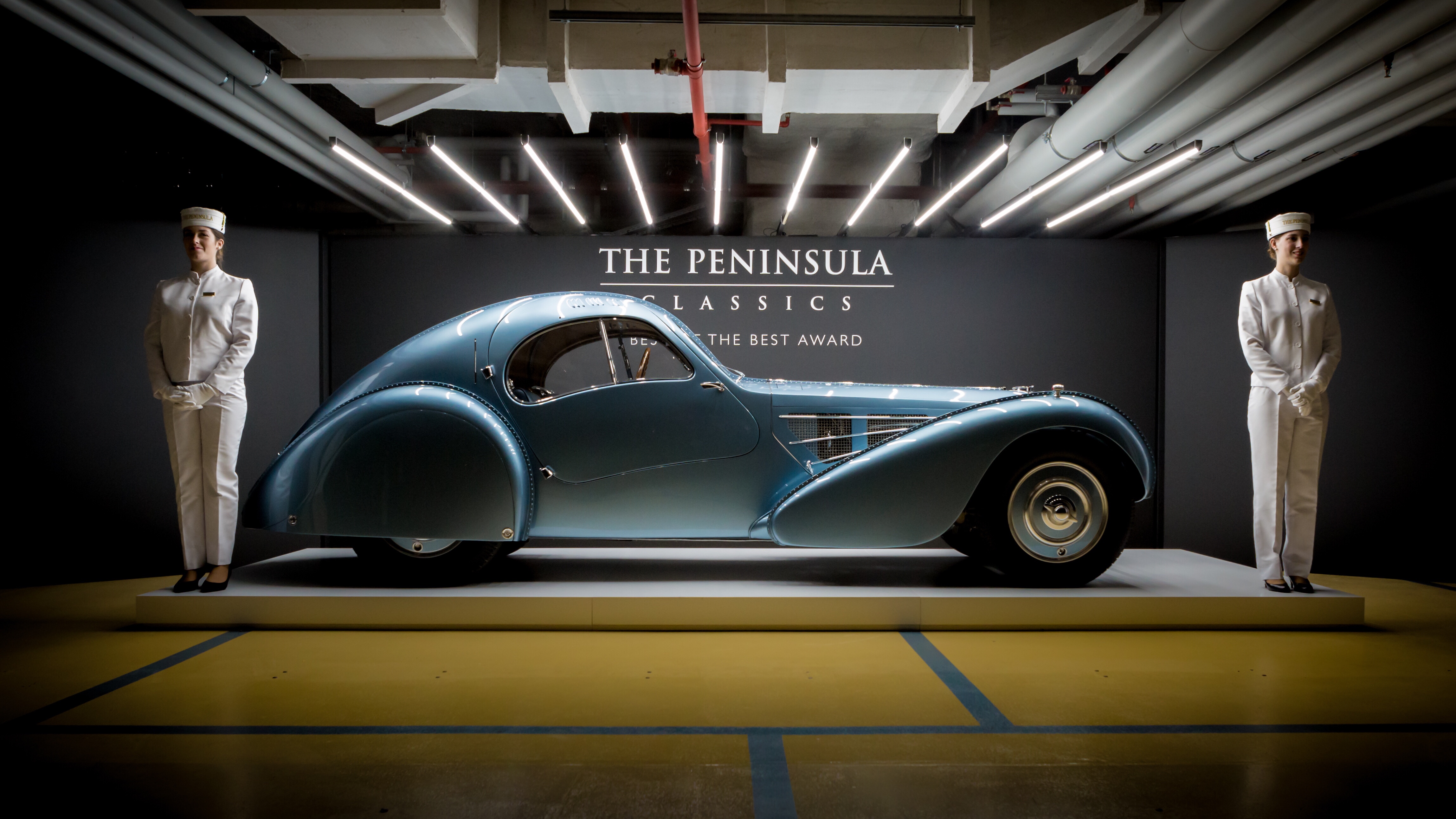 A rare and beautiful 1936 Bugatti Type 57SC Atlantic was named the winner of the prestigious The Peninsula Classics Best of the Best Award  today at The Peninsula Paris hotel.

Now in its third year, The Peninsula Classics Best of the Best Award brought together eight of the world’s finest classic cars—the best of show winners from the top international concours—to compete for the title of the most exceptional motor car in the world. The Bugatti is co-owned by the Mullin Automotive Museum, and Rob and Melani Walton, located in California, USA, and was named “Best of Show Concours d’Etat” at the 2017 Chantilly Arts & Elegance.

Speaking of the award’s legacy, The Hon. Sir Michael Kadoorie, Chairman of The Hongkong and Shanghai Hotels, Limited and co-founder of the award said, “My great hope is that we not only succeed in thrilling long-term car enthusiasts, but that this award will also ignite a new-found passion for those just discovering the world of motoring.”

Powered by a supercharged engine and considered by many to be the first supercar ever made, the winning Bugatti is one of four Type 57 Atlantic models ever produced, with only three in the world remaining. The vehicle was designed at the height of the art deco movement by Jean Bugatti, Ettore Bugatti’s son. Jean based the car on his other design, the 1935 Aérolithe concept car, which was famously riveted externally, for fear of the magnesium-alloy body parts catching fire. Jean kept this signature riveted seam on the all-aluminium body of the Atlantic.

“The Bugatti Type 57SC Atlantic is the crown jewel of the automotive circuit,” said Bugatti Head of Tradition Julius Kruta. “This car was Jean Bugatti’s masterpiece with its beautiful and breath-taking lines, plus its unmatched performance for the time. Today, it remains the ultimate expression of the Bugatti legacy: unparalleled power and beautiful design.”

This model, chassis number 57374, was the first Type 57 Atlantic produced and is the only surviving “Aéro Coupé,” a designation given to the first two cars that were mechanically very similar to the Aérolithe. The car was delivered new in 1936 to Britain’s Nathaniel Mayer Victor Rothschild, third Baron Rothschild, and has since passed through few owners in its 82-year history. The car has been displayed internationally, and most recently, was on display at the Los Angeles-based Petersen Automotive Museum for the “Art of Bugatti” exhibit.

“The Atlantic represents the pinnacle of everything I adore about French automotive styling and is widely described as the Mona Lisa of the automobile collector world,” said Peter Mullin, Founder and CEO of the Mullin Automotive Museum. “From its signature curves to its aviation-inspired rivets, to the Jean Bugatti designed sleek all-aluminium body, the car is truly a remarkable piece of art. I’m very honoured to have shared it with the world amongst other worthy ‘Best of the Best’ contenders.”

“I second Peter’s thoughts – the other seven nominees were simply stunning, which makes winning the award feel even more special,” said Rob Walton, co-owner of the winning car. “What this award does is allow us to take a step back and admire the quality and beauty of the greatest classic cars in existence today. For an automotive fan like myself, it’s a joy.”

The founders of The Peninsula Classics Best of the Best Award are each known as some of the world’s foremost motoring experts, and were brought together by their shared passion for fine motor vehicles, impeccable restorations, as well as the preservation of tradition and heritage.

The Hon. Sir Michael Kadoorie, together with award co-founders Christian Philippsen, William E. “Chip” Connor and Bruce Meyer, created the award that debuted in 2016. The gentleman each cite a passion for automotive excellence as the inspiration behind the creation of The Peninsula Classics Best of the Best Award.

According to Bruce Meyer, “For the third year, the ultimate standard for judging The Peninsula Classics Best of the Best Award was that of uncompromised quality and design. Of course, this made the selection process most challenging for the esteemed group of panellists.” He continued: “In the end, the 1936 Bugatti Type 57 SC Coupé Atlantic emerged victorious, with its exceptional, bespoke design making it a marvellous combination of art and technology.”

Previously presented during Monterey Car Week, the award moved to Paris this year to be presented during the world-famous Rétromobile event. The Bugatti was presented at an exclusive reveal party in The Peninsula Paris’ subterranean garage, following a private dinner.

The winning vehicle was selected after being reviewed by 24 automotive experts, designers and notable celebrities within the motoring world. Learn more about each judge, in addition to the seven other nominees by clicking here.

The Peninsula Hotels, owned and operated by The Hongkong and Shanghai Hotels, Limited, is proud to sponsor The Peninsula Classics Best of the Best Award, a natural extension of the group’s passion and appreciation for luxury, travel and the motoring lifestyle. With 10 hotels in global gateway cities throughout Asia, USA and Europe, The Peninsula Hotels celebrate glamour in travel, and aims to showcase the ultimate in sophistication, innovation and design. Known for its timelessly elegant hotels, discreet integration of technology and functionality, and extensive fleet of luxury transport, the group aims to bring its heritage and expertise to celebrate the very best in the world of motoring. 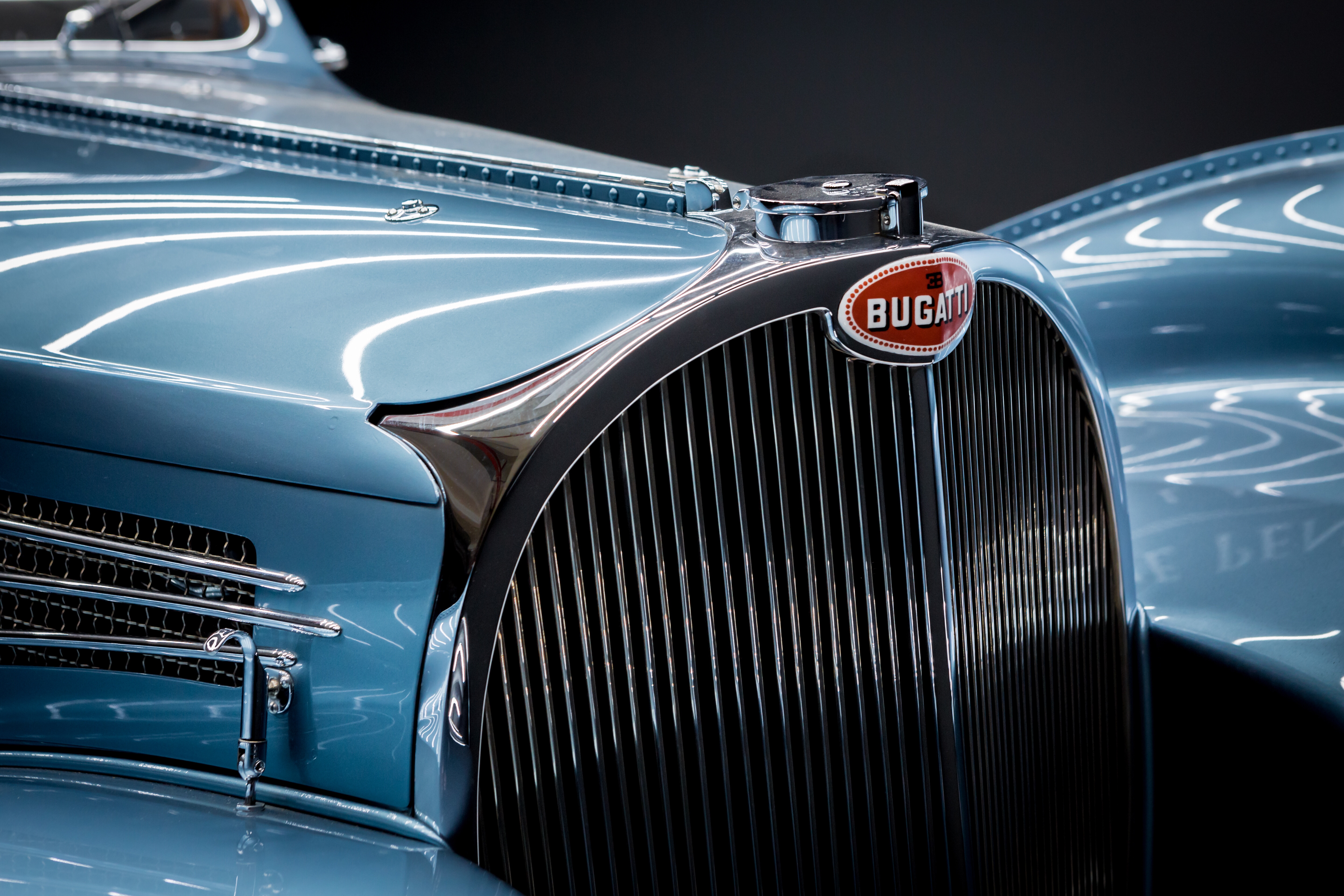 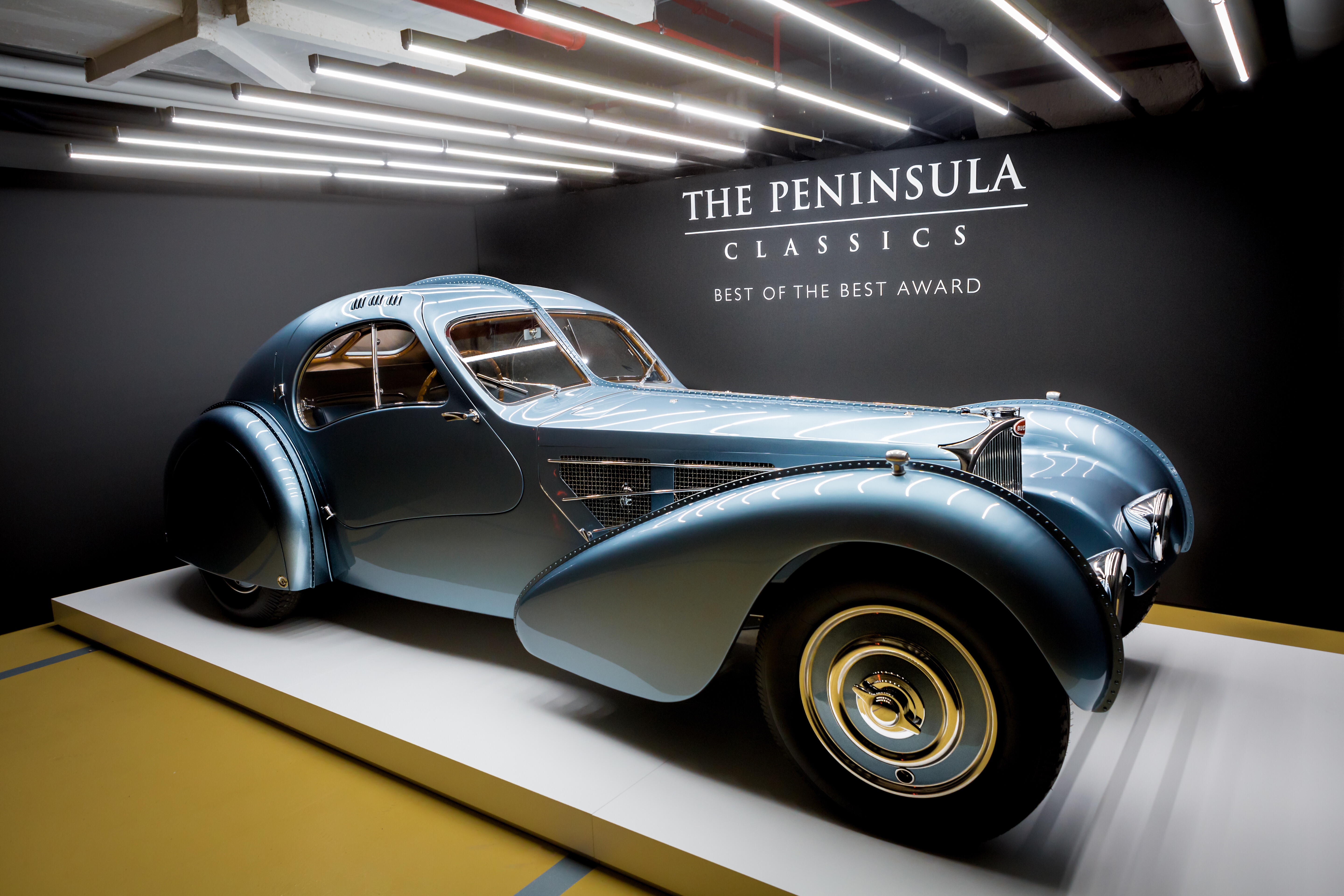 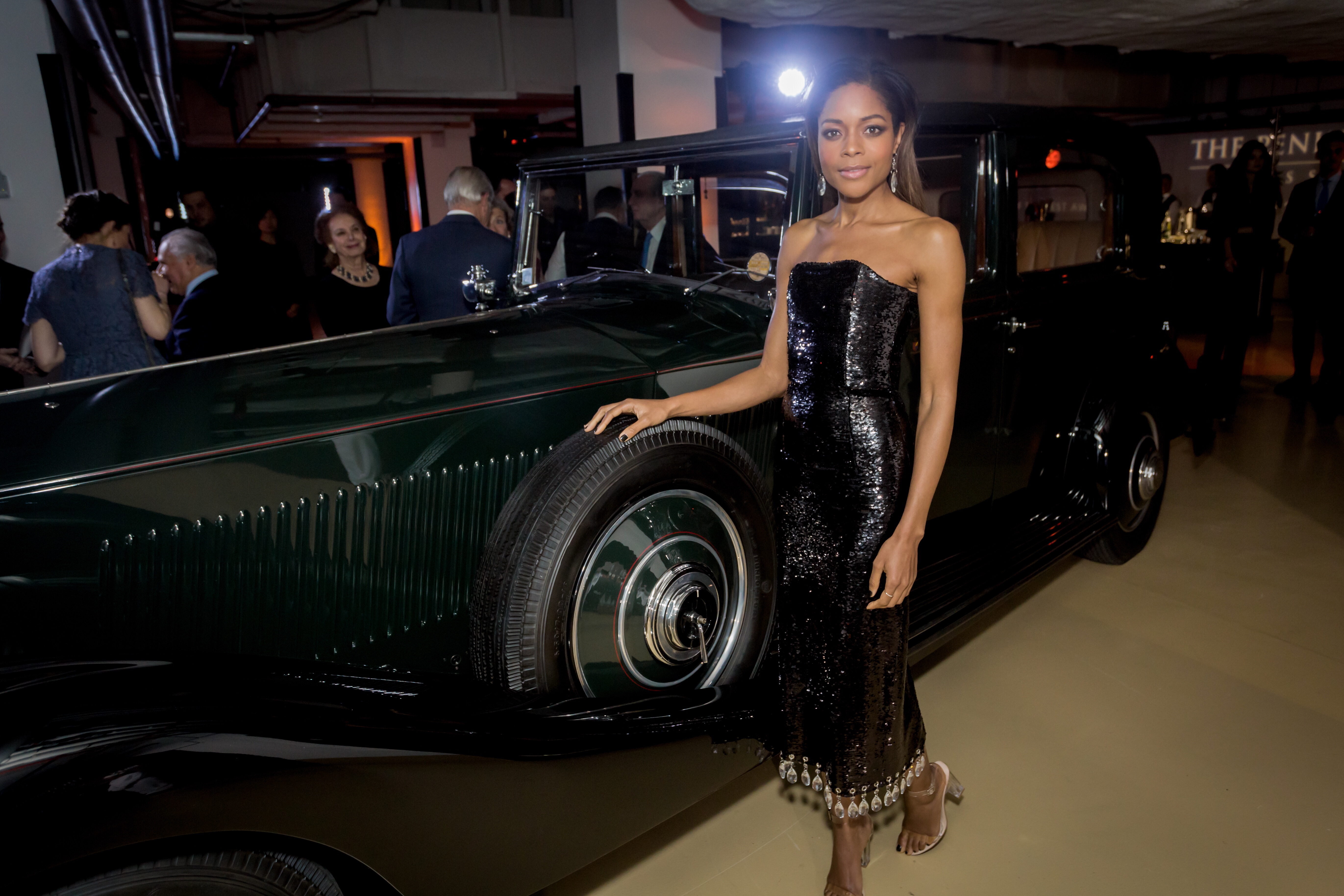