On Thursday, September 2nd, 360 Magazine attended the Ellaè Lisquè’s fashion show in Los Angeles for the debut of their “Birthday Collection.” Designer Maxie J. chose a desert inspired theme for the models to walk through wearing her latest designs. The melanated event was filled with stars such as Christian Combs, Sevyn Streeter (who performed), Chris Brown, Slick Woods, Amber Riley, Clermont Twins (who opened the show), and many more to celebrate the Black designer and her latest collection.

While many fashion enthusiasts continue to have conversations about inclusion in the fashion industry, the Los Angeles native took matters into her own hands and built a table of her own. With uncompromising ambition & talent, Maxie J. first gave birth to her love child Ellaè Lisquè in 2014-a line intentionally created to make women feel sexy, bossy and sophisticated.

The fashion show took place at LA’s premier nightclub, Exchange LA, with decor by Wright Productions. 360 degree cameras were setup around the event for guests to shoot interactive videos in their outfits and share to their social media platforms. The “Birthday Collection” was elegant and chic for women of all sizes and ethnicities. 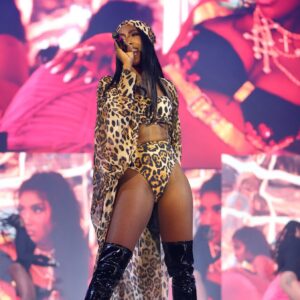 Louis Vuitton’s new partnership with K-Pop superstars BTS proves the band has a monumental impact on every brand they touch. Louis Vuitton designer Virgil Ablog surprised the world this morning with the release of a spin-off fashion walk film named “Hope,” dedicated to his fall/winter 2021 menswear collection modeled by the world’s biggest boyband. Earlier this year, BTS became LV house ambassadors and have been advocating for the monogrammed pieces ever since.

The film marks their first big showcase for the brand. Directed by Jeon Gowoon and Park Syeyoung, each member presents a new look designed by Abloh as they navigate through an industrial space filled with Vuitton models, and a seemingly endless maze of staircases. Because this is their first official high-fashion collaboration (previously only with athletic brands such as Puma and Fila), the BTS fanbase ARMY was absolutely geeking out on Twitter.

Thanks to their appearance in Louis Vuitton’s #LVMenFW21 fashion show in Seoul, where members of the group modelled the new collection, social media posts featuring BTS accounted for 9 of the top 10 most engaged fashion-related posts in the past week. BTS-related LV posts generated 5M interactions for the brand in just 7 days, compared to less than 400K mentions for all non-BTS mentions of LV in the same period.

Not to mention, with their ever-growing popularity; BTS bounds onto the Billboard Hot 100 songs chart at #1 with their new single “Permission to Dance.” The boyband supplants itself at the top spot, as their previous single “Butter” falls to #7 after seven consecutive weeks at #1.

The dominant influence of K-Pop is just one of many surprising trends that has changed the way consumers engage with fashion and beauty brands over the past year. The latest Fashion & Beauty Industry Report from consumer intelligence platform, Talkwalker, reveals how apparel and cosmetics brands are adapting to the latest changes in post-pandemic consumer behavior, from the rise of athleisure culture to the resilience of makeup tutorials as a content cornerstone even during the work-from-home era.

“Whether people are working from home or in the office, how they look and feel remains a consistent topic of online conversation. What’s changed is who people look to for their sense of style and self,” said Todd Grossman, CEO of Talkwalker Americas. “K-Pop stars like BTS have shown a tremendous ability to excite fans to engage with brands on a seismic level, bringing far more attention to a legacy brand than it could otherwise generate on its own.”