Clairo revealed her new single, “Blouse,” as well as the news of her forthcoming sophomore studio album, Sling, will see its global release on July 16th via FADER Label/Republic Records.

Written and recorded in up-state New York at Allaire Studios, Sling was co-produced by Clairo and Golden Globe/GRAMMY® Award-winning producer Jack Antonoff and was announced last night following Clairo’s live performance of “Blouse” on NBC’s The Tonight Show Starring Jimmy Fallon. The American singer-songwriter also shared the album artwork along with the announcement that in addition to FADER Label, she has since signed a worldwide deal with esteemed label giants Republic Records.

Praised for her diary-worthy stories earmarked by her devilishly sharp commentary and angelically intimate vocals. The singer, songwriter, multi-instrumentalist, and producer has quietly threaded these stories into the fabric of popular culture since she first surfaced as a phenomenon out of her dorm bedroom. Following the success of her 2018 debut, Diary 001 EP, Clairo unveiled her 2019 full-length debut album, Immunity. The now 22-year-old received critical acclaim from the likes of Billboard, The New York Times, Los Angeles Times, NME, NPR, Pitchfork, Rolling Stone, and more.

Beyond performing on TV shows like Jimmy Kimmel LIVE!, and most recently The Tonight Show Starring Jimmy Fallon, she has notably sold out headline tours as well as joined the bills of Coachella and Lollapalooza. Clairo’s growing catalog includes the platinum-certified “Pretty Girl” and gold-certified “4Ever” and “Flaming Hot Cheetos,” in addition to “Are You Bored Yet?”—her platinum collaboration with Wallows. To date, she has amassed over 3 billion streams and counting. In 2021, she turns the page on the next chapter with her highly anticipated sophomore album, Sling—out worldwide on July 16th.

Global superstar Tones And I has announced her widely anticipated debut album, Welcome To The Madhouse, which will arrive worldwide on July 16th Tones And I has shared the forthcoming album’s lead single, “Cloudy Day,” which is available on all streaming platforms and accompanied by an animated video streaming on her official YouTube channel. Available for pre-order today, Welcome To The Madhouse stands out as a deeply reflective and personal body of work for Tones And I, with the Australian artist writing the entire album by herself and co-producing every song.

Tones And I commented on the significance of Welcome To The Madhouse explaining, “This album for me is very up and down and reflects the forever changing emotions in me. There are songs on the album that were written before “Dance Monkey,” about not knowing if busking was right for me. There are songs about my good friend T passing away and not wanting to deal with those emotions. The ups and downs of life in lockdown and the mental challenges/struggles. Some songs make me laugh and some make me cry but there is no running theme or vibe to the album – the songs are unique to how I was feeling the day I wrote them.”

Regarding “Cloudy Day,” Tones And I elaborated on the single’s origins noting, “After my friend T passed away I was struggling to write any songs that were happy or that I even liked. I met up with a friend who told me this saying from his late mum: ‘On a cloudy day, look up into the sky and find the sun.’ I knew I wanted to use that as a lyric and the next time I went into the studio I wrote ‘Cloudy Day.'”

Tones And I Initially laid the foundation for Welcome To The Madhouse last year with the release of “Fly Away,” a poetic and powerful composition which has amassed over 190 million streams with Tones And I delivering performances of the song on Jimmy Kimmel Live! and The Ellen DeGeneres Show. She followed it up in 2021 with the release of “Won’t Sleep,” which arrived alongside an official music video continuing what has become a tradition of highly unexpected and unforgettable visuals. Both tracks reflected the inimitable idiosyncrasies of Tones And I’s signature style, highlighting her clever lyricism, unpredictable songcraft, and indisputable knack for a hook.

Having had to postpone her global tour in 2020 due to COVID-19, Tones And I will be announcing new US, European and UK headline dates in the coming weeks. For more information on Tones And I’s tour dates and tickets to upcoming shows, click HERE.

Tones And I‘s global smash “Dance Monkey” officially became the 3rd most streamed song of all time on Spotify making the track the most streamed song ever by a female artist on the platform. The “Dance Monkey” official music video has surpassed 1.6 billion views on YouTube, while the track has eclipsed six billion streams globally and earned 4x platinum certification from the RIAA in the US as well as multi-platinum or diamond certification in sixteen other countries. Plus, “Dance Monkey” hit #4 on Billboard’s Hot 100 chart, making “Dance Monkey” the first top five Hot 100 hit solely written by a woman in over eight years. In Australia, “Dance Monkey” holds the all-time record for the most weeks spent at #1 on the ARIA Singles Chart, while in the UK “Dance Monkey” has made Tones And I the longest running #1 of all time by a female artist on the Official Singles Chart. The New York Times detailed the making of “Dance Monkey” in their Diary of a Song video series, speaking with Tones And I about her journey from local busker to global star.

About Tones and I

Originally from Australia’s Mornington Peninsula, Tones And I traveled to Byron Bay in early 2018 to take a chance at busking. On the first day she had crowds spilling onto the street. Tones quit her retail job and decided to make Byron her new home where she lived out of her van for a year, honing her songwriting and busking every weekend. A year later, she had one of the biggest songs in the world with her global smash “Dance Monkey.”

After generating over half-a-billion streams and topping off multiple year-end lists in 2020, singer-songwriter Claire Rosinkranz is back with a brand-new single entitled “Frankenstein” today via slowplay/Republic Records. Listen to “Frankenstein”—HERE.

Another catchy bop, “Frankenstein” uses cowbell to hold down the guitar-laden beat as Claire adds her own 21st century spin to the song inspired by The Cardigans’ classic 90’s hit “Lovefool.” It’s a fun, lighthearted track that’s perfect for summer listening.

About the track, she shared, “I imagine somebody who’s been in a bunch of past relationships, and they haven’t worked out for whatever reason. The guy is just too egotistical. So, you’re fed up and actually try to Frankenstein your perfect boy together. It’s honestly innocent, carefree, and cute.”

The song heralds her forthcoming sophomore EP—due out this summer.

Southern California singer, songwriter, ballerina, and multi-instrumentalist Claire Rosinkranz grafts the coming-of-age experience onto D.I.Y. soundscapes often cooked up by her dad in the garage. Within a year, the 17-year-old has eclipsed over half-a-billion total streams and received widespread acclaim courtesy of Rolling Stone, Variety, Coup de Main, Buzzfeed, Genius, and more. OnesToWatch championed her as one of its “Top Artists To Watch in 2021,” while New York Times and Billboard named her breakout anthem “Backyard Boy” among “The Best Songs of 2020.” Along the way, Claire collaborated with the likes of Jeremy Zucker, Role Model, and Clinton Kane and earned the support of Olivia Rodrigo, Tai Verdes, Lexi Jayde, and 347aidan. 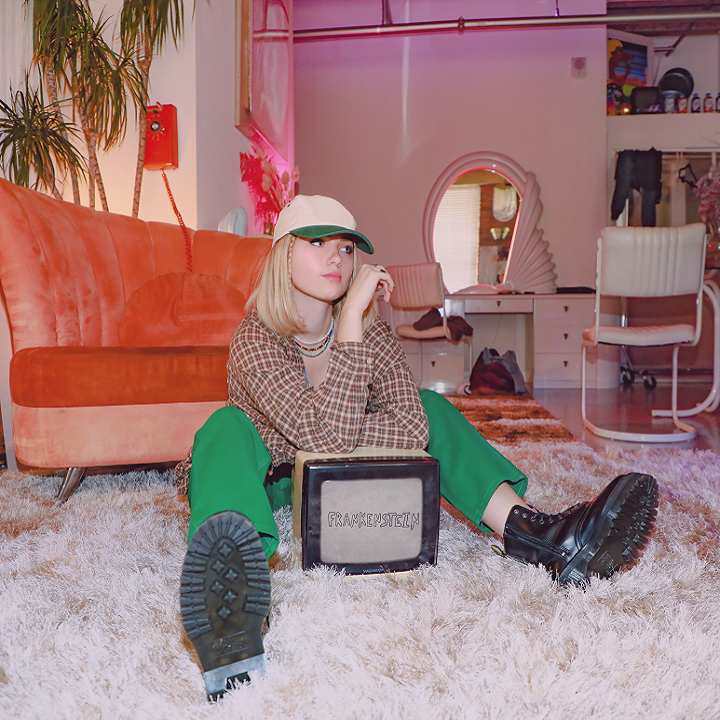