Short on vacation time but still have the tendency to get out and explore before the summer ends? Look no more!

Discover how a trip to sundrenched South Africa can be an exciting and fun-filled getaway over just a long weekend.

With an unparalleled combination of nature, culture AND an exciting adventure, South African Tourism highlights how you can explore the destination in just 72 hours. That’s right.

With direct flights from major cities in the US, a favorable exchange rate and affordable packages it’s never been easier to explore the beauty that South Africa has to offer you.

Here are just some of the most to-do attractions for any visitor planning a quick getaway to this captivating yet marvelous country:

So, what are you waiting for? Grab your suitcase and get packing!

BRAAI AND BEYOND: WHAT TO EAT IN DURBAN AND WHERE TO EAT IT

Durban, South Africa, the seaside gem of KwaZulu-Natal Province, is best known for its golden beaches and relaxed surf culture which is about to heat up in the summer months of November through March.

Beyond the waves, Durban’s vibrant culinary scene offers a mix of classic dishes that are a delightful blend of the Zulu, Indian, and European cultures that make up the city’s rich heritage. From flavorful hometown favorites like Bunny Chow, to the regional barbecue known as braai and traditional afternoon tea, visitors can eat like locals with thefollowing culinary experiences that give Durban its unique flavor.

Meat is at the heart of Zulu cuisine, so it is no surprise that South Africans love a good barbecue, known as braai throughout the country. The legendary Max’s Lifestyle in the heart of Umlazi Township is the best place to enjoy a traditional shisa nyama, Zulu for “hot meat,” while listening to local Kwaito music and sipping a cold drink. People from around the world mingle over drinks and traditional food at this hotspot, which also boasts a VIP lounge and Sunday dance parties. The onsite butchery offers a variety of meat prepared braai style and served on a wooden platter in the traditional Zulu way.

Maize starches are another staple of Zulu cuisine and are often used in porridges, or in the liquid form as beer. Robson’s Real Beer brewery and restaurant, located on the reclaimed Point Waterfront, is home to one of the oldest craft beers in South Africa. A family-owned business, Robson’s pioneered bottle conditioned beers, made by a method similar to champagne that produces beer with remarkable complexity and taste. The eatery located inside Robson’s brewery pairs natural, locally inspired beers like the Robson’s Pale Ale and East Coast Ale with sophisticated pub fare, like panko crusted prawns and grilled peri-peri chicken. Robson’s also brews up an immersive experience for visitors by offering beer tasting tours for those wanting an inside look at the craft brewing process.

Catch some rays and fresh eats at a beach shack

After working up an appetite with a stroll along Durban’s popular Golden Mile promenade, visitors can kick back at one of the beach shack-style eateries where the views and food can’t be beat. The laidback beachy vibe at Surf Riders Café captures Durban’s quintessential surf culture, offering burgers, pizza, and more, along with breakfast served in biodegradable cartons for visitors to enjoy at a table or on the beach. Afro’s Chicken Shop offers up simple and affordable chicken takeaway in an iconic bright yellow refurbished shipping container. Known for its chicken and “tjips” (chips), Afro’s Chicken also serves post-surf fare like egg and bacon rolls.

Hop over to CaneCutters for Bunny Chow

Durban’s top culinary delight is its signature dish of Bunny Chow, Indian curry housed in a hollowed-out loaf of white bread that serves as a portable bread bowl. Not to worry, no rabbits were harmed in the making of this dish. The name “bunny” originates from an Indian term referring to merchants. Highly recommended by locals and known for its award-winning Bunny Chow, CaneCutters is an authentic Indian restaurant that uses recipes handed down from generation to generation. Visitors can enjoy freshly prepared curries, like their popular “bean bunnies,” traditionally served with crushed chili pickles, carrot sambals (a simple carrot salad), and coriander.

Butcher Block prides itself on serving the best steaks in the country with locations on Florida Road, Durban’s bustling culinary and entertainment epicenter, and the upscale beach resort area of Umhlanga Rocks. The menu includes meats aged to perfection, like tender fillet stack with herbs and spicy butter, and steak with bacon and biltong, a dried, cured meat that originated in South Africa. Nestled inside of each Butcher Block location is a celebrated wine cellar, featuring some of South Africa’s best-known wines.

An ode to its colonial past, the tradition of high tea is still celebrated in Durban. Visitors can step into The Oyster Box hotel’s charming sunlit Palm Court and enjoy the grandeur of the past surrounded by ceramic chandeliers purchased from the Savoy Hotel in London, natural sunlight, and towering palms. This leisurely affair takes place each afternoon from 3 to 5 p.m. and features live piano music and lavish baked scones, pastries, quiches, cakes, and finger sandwiches. Visitors will also want to take their time savoring the bold flavors of the renowned curry buffet in the hotel’s Mediterranean-inspired Ocean Terrace Restaurant with stunning views of the Indian Ocean. Foodies seeking to spice up their life can indulge in more than 10 meat, fish, and vegetarian curries accompanied by homemade chutneys and a selection of Naan.

Located an hour southeast of Johannesburg by air, Durban is the beachfront gem of KwaZulu-Natal Province (KZN). A bustling harbor city and popular surfing spot, Durban lies on the Indian Ocean and is South Africa’s third largest urban area.

Remnants of British colonialism and a mix of Zulu, Indian, and Afrikaans traditions give the city a rich cultural heritage, while outdoor activities abound on the signature Golden Mile beachfront and in the lush rolling hills that encompass Durban’s suburbs. For more information, visit http://visitdurban.travel. 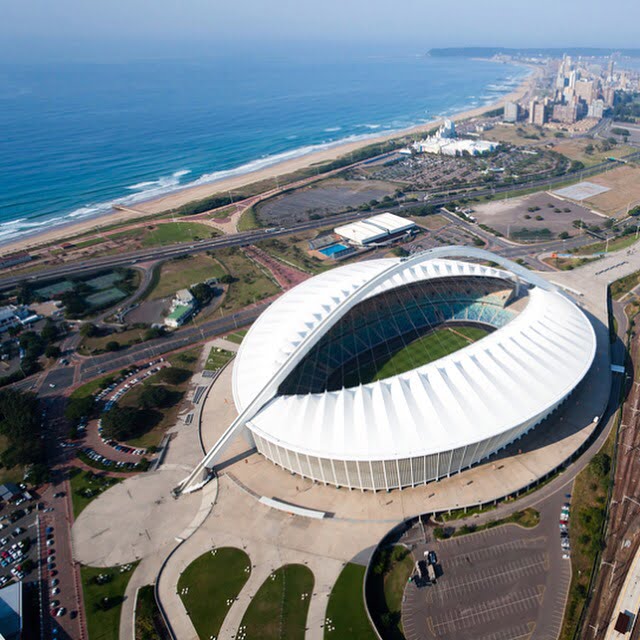 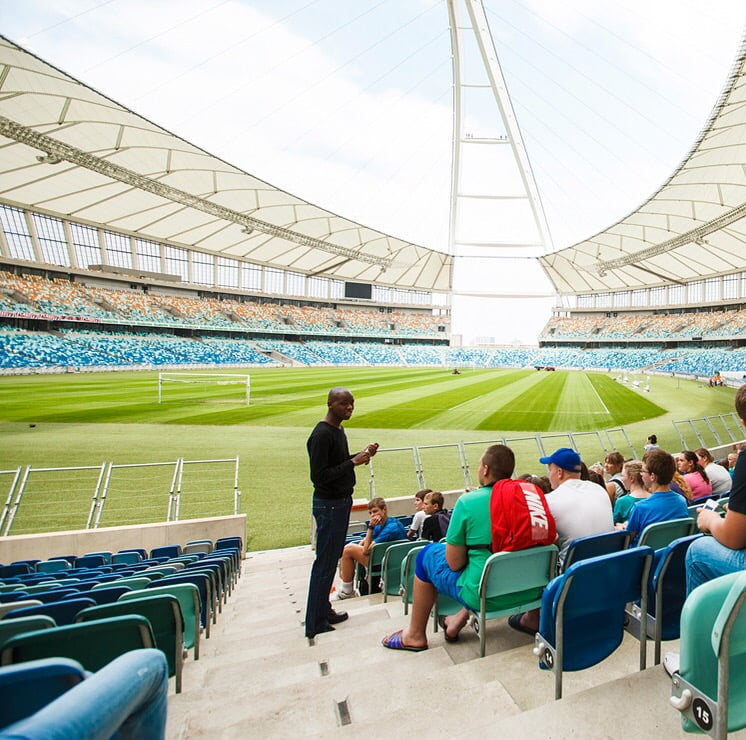 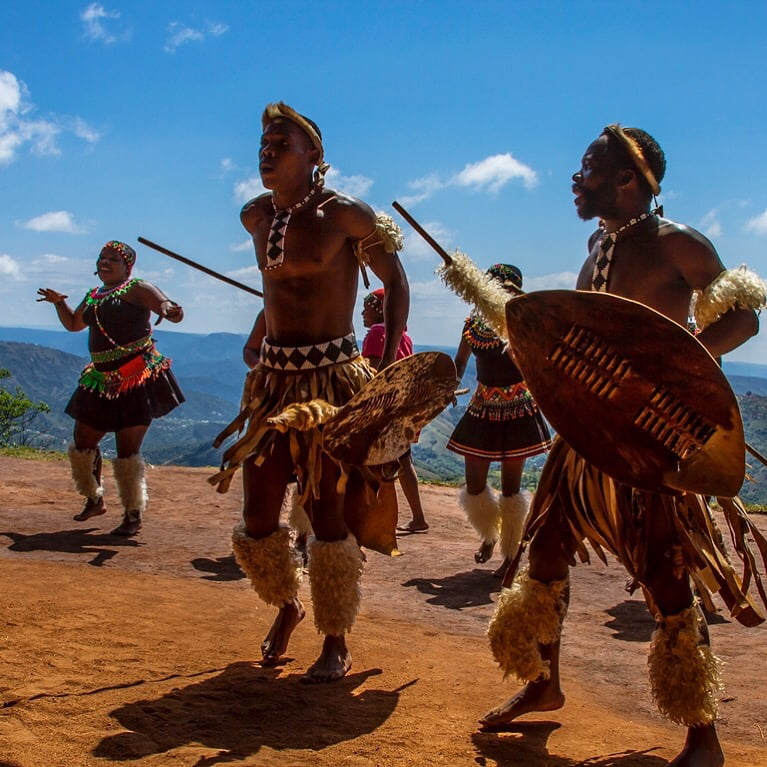