The United States is a nation currently plagued by many crises. We are facing a public health, economic, and civil rights crisis all at the same time. The coronavirus pandemic alone is changing almost every facet of life for hundreds of millions of Americans. Cases of COVID19 are rising again with fear and anxiety close behind.

Dr. Carlin Barnes and Dr. Marketa Wills – two Harvard-trained psychiatrists and co-founders of Healthy Mind MDs, LLC – a wellness enterprise whose sole mission is to improve the emotional and mental well-being of all Americans. They believe this increased rate of clinical anxiety and depression can lead to another major crisis – suicide. Mental health professionals are concerned that suicide rates will greatly increase over the next few months related to Americans deal with what is happening around them.

Suicide is not a new national problem. Research has established a strong link between economic upheaval and suicide and substance us In fact, it is a public health crisis that has plagued America for quite some time. Suicide rates among adults in the U.S. were on the rise before this pandemic. In 2020, the U.S. Centers for Disease Control and Prevention reported that suicide deaths among those age 1 to 64 had increased to 35% in less than two decades. It is evident by our nation’s response, COVID-19 caught us off guard. A study of the Great Recession that began in late 2007 found that every percentage point increase in the unemployment rate, there was about a 1.6 percent increase in the suicide rate.

Drs. Barnes and Wills believe it is important that we, individually and collectively, ring the alarm regarding the possibilities of COVID-19 related suicide. They are available to talk about the signs of a loved one who may be contemplating suicide and how to combat it. Signs include:

• Increased use of alcohol and drugs

• Stating that life is not worth living

• Starting to get possessions and final paperwork in order

Given this confluence of stressors, the mental health of many Americans is becoming a major concern as we adapt to absorb the psychologic impact of all these major events. Data shows that one third of U.S  adults have reported symptoms of clinical anxiety and depression related to this public health crisis.

Barnes, MD, is a board-certified psychiatrist and behavioral health medical director at a Fortune 500 managed care company. For the past eighteen years, she has practiced child, adolescent, and adult psychiatry—she has a thriving, diverse, boutique private practice with patient clientele ranging from working adults to urban children and  adolescents. She trained in the specialty of psychiatry at programs  affiliated with both Harvard University and Emory University Schools Medicine and attended Texas A&M University College of Medicine, where she received a Doctor of Medicine degree. Dr. Barnes is a member of several professional organizations including the National Medical Association, the Black Psychiatrists of America, and the American Academy of Child & Adolescent Psychiatry. She is originally from Hillside, New Jersey, and currently resides in Houston, Texas, where she lives with her son.

Marketa Wills, MD, is a board-certified psychiatrist with a master’s in business administration from the Wharton School of Business and serves as a physician executive at a Fortune 500 health insurance company. She has cared for severely mentally ill patients in inpatient, outpatient, and emergency room clinical settings. As treatment team leader and medical director, she effectively collaborated with other mental professionals to ensure that patients with a variety of ailments—ranging from schizophrenia to postpartum depression to substance abuse—were able to live as productively as possible. Dr.Wills earned her medical degree from the University of Pennsylvania School of Medicine and completed a residency in adult psychiatry at Harvard’s Massachusetts General Hospital/McLean Hospital program. In her last year of the program, she served as chief resident. She has received numerous accolades and awards highlighting her clinical and community achievements. Originally from Dayton, Ohio, she currently resides in sunny Tampa, Florida.

The doctors have shared their expertise on numerous news outlets as well as CBS News, NBC Syndication and CBS Radio.
July is Minority Mental Health Awareness Month. Drs. Barnes and Wills would be ideal experts to talk about mental health and suicide issues.

Water filled veggies are great for helping you lose weight, and stay regular so you can relieve bloat. Some great examples are tomatoes, cucumbers and zucchinis that are rich in potassium, which can also help release water retention you may be carrying in your stomach.

Research has shown that cortisol, our stress hormone, can cause abdominal weight gain. Meaning that if you are stress eating, you will likely not just gain weight, but gain it in your lower stomach. Therefore, it is a good idea to ab-void stress eating in general and find better coping strategies for dealing with stress. Examples are calling a friend, taking a walk or long shower, doing yoga or another workout, meditating and/or journaling.
And the foods we reach for when stressed are typically higher in fat, refined carbohydrates, and sugar, which can be addictive and lead to excess weight gain. Therefore, it is a good idea to keep these trigger foods out of sight and out of mind, and not buy and bring them home, especially during stressful times.

Clear the counter tops of sliced bread, jars of cookies, bowls of candies, and boxes of cereal. And replace it with great things that can be helpful immediately if feeling hungry like a water cooler, boxes of cherry tomatoes (my daughter reaches into these daily for a quick snack), and a bowl of apples. You should also have things out that keep you thinking about your healthy lifestyle. Some examples are a tea or coffee station; some veggies that need cooking like spaghetti squash, turnips, and onions; and a Shakeology or smoothie station (if there is still room).

I like to make a chocolate Shakeology shake with half a cup of water, half a cup of coconut water, ice, and a scoop each of the Shakeology Power Greens and Digestive Health Boosts. This recipe tastes like delicious chocolate ice cream, but is only 250 calories. It also has 20g of protein which helps stave off hunger and cravings, and 13g of fiber which helps keep you regular, (because constipation is definitely not “core flattering”).

I always keep a little “mommy drawer” that contains mint gum in the kitchen. I find that if someone is craving chocolate, brushing his teeth with mint toothpaste could crush that craving. And chewing gum makes it really hard to also chew a mouthful of pasta or teriyaki beef stir fry.
Also the PB& J sandwich swapped for a PB&J Wonder Whip. In a bowl, add plain Greek yogurt, powdered peanut butter, and honey or stevia to taste. Whip it up very well, and top with sliced grapes or strawberries. 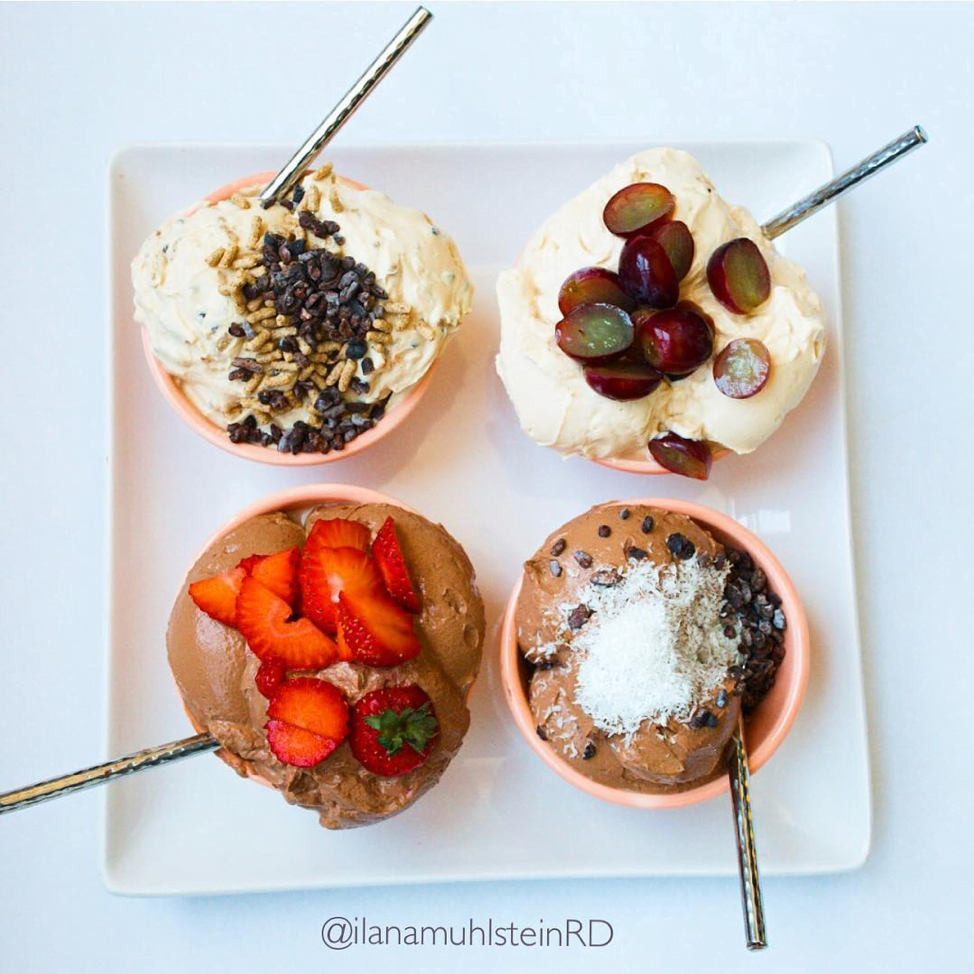