Pre-order Man On The Moon III: The Chosen HERE

This stands out as the most anticipated sequel of 2020 and a blockbuster befitting of the Man On The Moon legend. Cudi returns with 18 new songs, inviting a cast of A-list collaborators to join him in space. These include anthems such as “Show Out” [feat. Pop Smoke and Skepta], “Lovin’ Me” [feat. Phoebe Bridgers], and “Rockstar Knights” [feat. Trippie Redd]. Not to mention, acclaimed director Nabil [Kanye West, Kendrick Lamar, Frank Ocean] helmed the music videos for “She Knows This” and “Heaven On Earth”—set to be unveiled soon. Check out the full tracklisting below.

In other big news, Cudi recently co-founded his own production and music management company Mad Solar backed by none other than Bron.

Cudi blasted off into history with Man on the Moon: The End of Day in 2009. It has since gone double-platinum, garnered three GRAMMY® Award nominations, and seized a spot on Rolling Stone’s “500 Greatest Albums of All Time.” A year later, Man on the Moon II: The Legend of Mr. Rager claimed #3 on the Billboard Top 200 and went platinum. Audiences worldwide have clamored for the next chapter of this trilogy for a decade now. Cudi delivers with Man on the Moon III: The Chosen now.

Take flight higher than ever with Kid Cudi again.

Over a decade ago, Kid Cudi dubbed himself “The Man on the Moon” with good reason. Since 2008, the Grammy Award®-winning multi-platinum trailblazer and trendsetter has cast his influence over hip-hop like a lunar glow. Celebrated by everyone from Kanye West to Travi$ Scott, his 2009 full-length debut, Man on the Moon: The End of Day, has earned double-platinum certification from the RIAA. Cudi followed up with the platinum selling 2010 album Man on the Moon II: The Legend of Mr. Rager. Recognized as a vital force in pop culture and music, 2012 saw him win “Best Rap/Sung Collaboration” for “All of the Lights” at the GRAMMYS®. Indicud captured his highest chart entry on the Billboard Top 200, bowing at #2 and yielding a platinum-selling favorite “Just What I Am” a year later. Selling over 20 million singles worldwide, his influence has only expanded exponentially with time.

2016’s PASSION, PAIN & DEMON SLAYIN’ marked a fiery return to form. “Baptized In Fire”[feat. Travi$ Scott] generated a staggering 39 million streams in six months. His sixth studio offering also drew praise from Complex, Billboard, Pitchfork, and The Fader, while XXL placed it among the “50 Best Hip Hop Projects of 2016.” He scorched late night TV with a powerhouse performance of “Kitchen” on The Tonight Show Starring Jimmy Fallon accompanied by a string orchestra.

He reunited with West on the 2018 psychedelic hip-hop-rock opus KIDS SEE GHOSTS. The union of these two innovators sent shockwaves throughout the culture. Not only did the record bow at #2 on the Billboard Top 200, but it garnered widespread acclaim from Pitchfork, Rolling Stone, XXL, Vice, The Guardian, and Entertainment Weekly. As the project took off, Cudi also graced the cover of Billboard.

Beyond his prolific musical output, he’s also appeared on the big and small screen. Not only would he lead HBO’s How to Make It in America and IFC’s Comedy Bang! Bang!, but he also starred in Need for Speed, Entourage, and more. 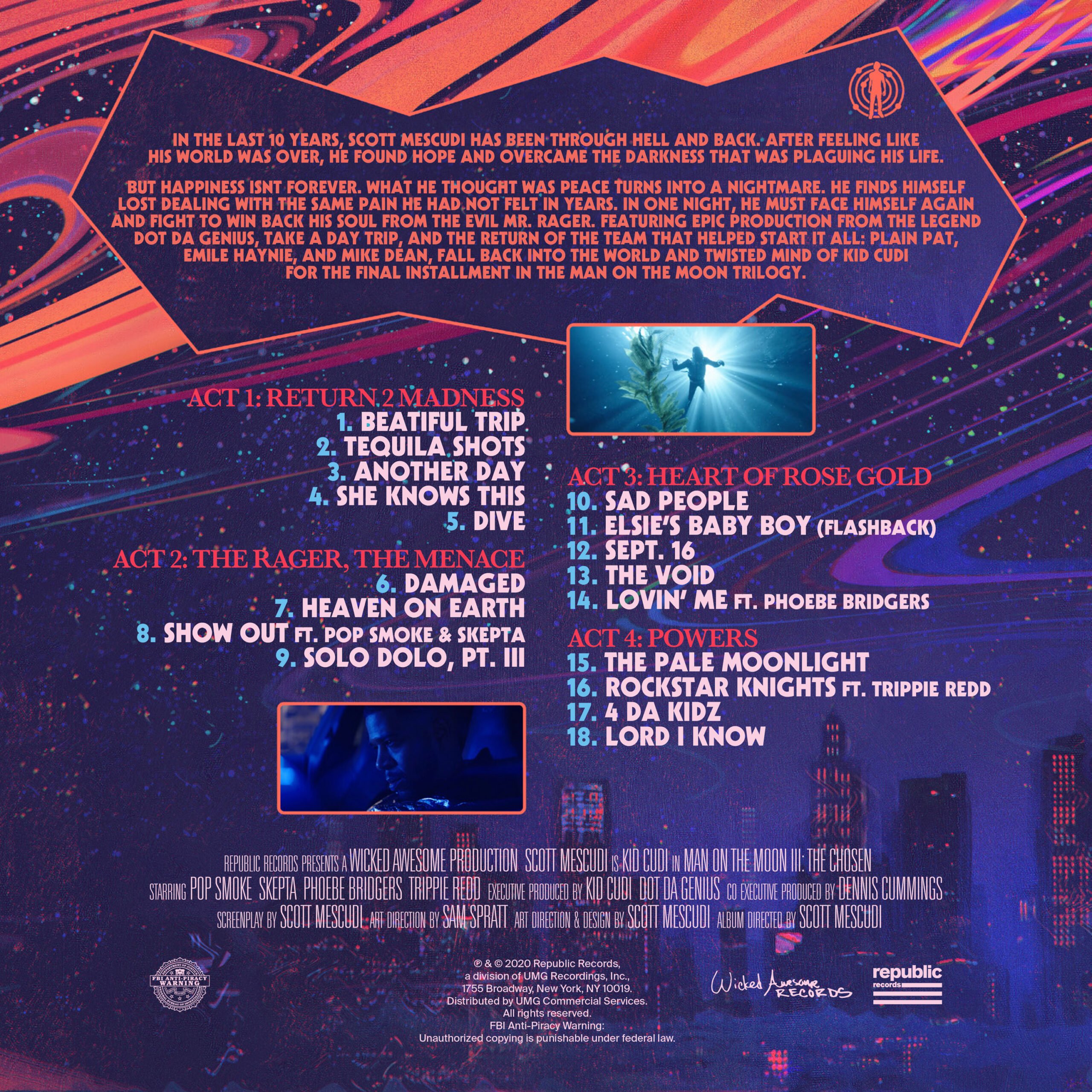