“The Oval,” the hit BET show from Tyler Perry, will return to homes for its second season in Oct., and Vaughn Hebron is front and center.

Playing Barry, a man whose daughter was kidnapped by his ex-girlfriend, Hebron finds himself in the middle of a show about an interracial family living in the White House. Perfect on the outside but full of lies on the inside, the family brings some of the best drama to television.

Hebron was born in Baltimore and attended Pennsylvania’s Lafayette College on a Division 1 football scholarship. At Lafayette College, he joined Omega Psi Phi Fraternity and eventually graduated with a Bachelor of Arts Degree in Economics and Business and minor in Africana Studies.

He began a career in pharmaceuticals but eventually moved to Los Angeles to pursue acting. Early on he booked commercials, and he’ll appear in the Will Smith-led “King Richard” in 2021.

Hebron answered a few questions for 360 MAGAZINE regarding “The Oval,” the entertainment industry and his future.

360: Tell us about “The Oval” and your character and what we can look forward to in season 2.

Hebron: “The Oval” is a Tyler Perry soap, set in the White House, that centers around the First Family and their staff. Well, at least it did in the first season. The series has expanded and plunged into the personal and dramatic lives of each individual and is now a whirlwind of dramatics and juicy story lines. I play Barry Hallsen on the show, the son of the White House Head Butler. Barry is a young man in his early 20s trying to establish himself while providing for his daughter, Callie. In the first season, he faces extreme challenges in and out of the White House, namely having his daughter kidnapped by his baby mother, Ruth, who is part of a vicious cult. The first season follows his journey to finding his daughter and the many problems he creates for himself in doing so. What viewers can look forward to in the second season is Barry getting closer to finding his daughter but also getting closer to the imminent danger that surrounds her.

360: Before you became an actor, you were in pharmaceutical sales. How was the transition, and are you excited about the career change?

Hebron: The transition was a big adjustment, going from a steady, regular paycheck and working every day to not knowing when the next time I’ll be working but still getting paid for it. Basically, I had to start all over from square one and figure things out each step of the way. It was intimidating and uncertain, but it’s also been very fulfilling. It feels like I am being driven by something that I never felt in my corporate career: a new sense of purpose. The unknowingness was both scary and exciting.

360: What has been your biggest challenge thus far in the industry?

Hebron: Coming from a corporate background, I was used to a lot of structure. There were always deadlines, expectations that would be met, structured and upkept working conditions, and if there were any questions, someone there to help. There’s almost none of that in the industry. There are no set timelines on when we book jobs, no set path on how to be successful and reach a certain level in your career and no formal performance evaluations. Even asking for help could be just as bad as not asking for help. The biggest challenge for me was adjusting to this space of having to completely trust in the process and letting God take the wheel. I had to surrender to the journey and have faith that the things I was doing were going to work out the way they were meant to. I really had to believe that everything would happen for a reason. It was a complete mindset shift; a completely different life. I still struggle with it at times.

Hebron: Well, one of the first lessons I learned in this industry is that you can’t put a timeline on things. At all. They could happen way sooner, or way later than you think, so just be open and ready when the time comes. My ultimate goal in this industry is to become an A-list storyteller. That’s the level I want to be at. However, storytelling comes in many different forms. Obviously acting is the main form of storytelling that I’m doing right now, but I’ve also written and pitched TV shows and see myself dabbing in that. I also see myself directing and producing one day as well. Additionally, I have a lot of ideas outside of the industry for my fitness and business, and of course I want to have a family one day.

360: Do you have any future projects that you’re allowed to talk about?

Hebron: Yes, I will be in the upcoming feature film “King Richard” starring Will Smith, as one of the main antagonists, hitting theaters Nov. 2021. We are working a couple other projects that are under wrap right now. 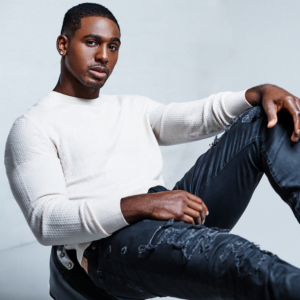 To learn more about Hebron, you can click right here.