The Philadelphia Eagles triumphed over the New England Patriots in February 4th in Minneapolis, Minnesota and took home the Vince Lombardi trophy for the first time in franchise history. 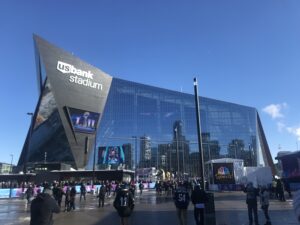 The Eagles dominated the beginning of the season, with sophomore quarterback, Carson Wentz, throwing 33 touchdown passes in the first 12 games, a new single-season record for the Eagles. However, the team suffered a devastating blow in December when Wentz tore his ACL in a match against the Los Angeles Rams in December. His backup, Nick Foles, was able to lead the team to a win in the fourth quarter of the game, but with 3 games left in the season, the team no longer had its superstar and many lost hope.

Despite being the number 1 seed in the NFC, the Eagles were named the underdogs for the Divisional Round, a title in which they embraced. Players took the field wearing dog masks, inspiring fans to do the same. Cries of “Dilly Dilly” echoed through the stadium as the Eagles beat the Falcons 15-10 and went on to destroy the Minnesota Vikings in the NFC Championship. 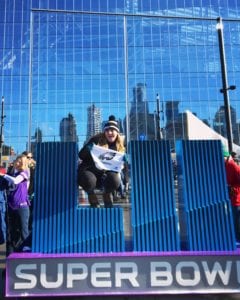 In the team’s third Super Bowl appearance, the Eagles faced off against the New England Patriots, which meant that Nick Foles, the Eagles backup who had considered retirement after his 2016 release from the Rams, was taking on one of the greatest NFL players of all time, five-time Super Bowl winner, Tom Brady.

No one anticipated an Eagles victory. Well, no one except for the team’s devoted fans.

I grew up in a suburb of Philadelphia in southern New Jersey that is only a fifteen minute drive from Lincoln Financial Stadium. I was born into a family of super-fans; I could spell Eagles by the time I was 2-years-old. Throughout my 22 years, I have attended countless Eagles games, most of which ended in my dad’s frustration. Despite the team’s continued poor performance over the years, fans like my dad remained loyal and patient. 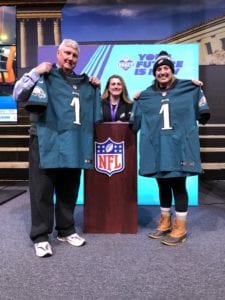 My dad, has stuck by the Eagles for all 66 years of his life. At 8-years-old, I attended the Super Bowl in 2005 with my family and watched the Patriots had defeated the Eagles 24-21. Going into Super Bowl LII my dad was cautiously optimistic. I had the privilege of attending the February 4th game with my family. Although the game took place in Minneapolis, over 1,000 miles away from Philadelphia, it looked and sounded as if it were a home game. The stadium was a sea of green. Crowds were chanting “E-A-G-L-E-S Eagles!” and singing the Eagles fight song all throughout the game. Sure, we may have a bad rep, but there is a certain camaraderie that comes with being an Eagles fan. The fan base can best be described as a family, a very loud family.

The Eagles were the first on the scoreboard, nabbing a field goal early in the first quarter. The Patriots responded with a field goal of their own, but Philadelphia fired back with a 34-yard pass that resulted in the first touchdown of the game. The lead was maintained for the remainder of the game with the Patriots trailing closely behind. At halftime, the score was 22-12.

Justin Timberlake took the field for his halftime performance that received mixed reviews. The “Filthy” singer danced through the crowd, and transitioned smoothly through his greatest hits. In the days leading up to the game, there were various rumors regarding who would be his guest performer. One controversial speculation hinted that Timberlake was planning to honor the late Minneapolis native, Prince, by using a holographic image of the singer. Prince had expressed during his lifetime that disapproved of holographic tributes to dead celebrities and his family tweeted out that they did not consent to the use of Prince’s image in that manner. Rather than a hologram, Timberlake honored Prince by projecting a video onto a large sheet in a way that was reminiscent to Prince’s 2007 Super Bowl halftime show. The sea of green transformed as the wristbands and finger flashlights given to Super Bowl goers illuminated purple. Following Timberlake’s show, Prince’s family tweeted a thumbs up emoji, signaling their approval.

With the second half underway, the intensity of the game picked up. Players from both teams understood what the victory would mean. For the Patriots, it would mark the continuation of a dynasty. For the Eagles, they would be bringing the win home to a city of devoted fans that have waited decades for the title. In the fourth quarter, the Patriots managed to pull ahead by a single point – 33-32 – with 9 minutes left in the game. Tight End, Zach Ertz, caught a pass at the 6-yard line, took three steps, and dove into the end zone with 2:55 left on the clock. Ertz’s wife, Julie Johnson Ertz, a soccer player on the U.S. Women’s National Team and World Cup champion, was at the game to witness her husband’s game winning play.

I was lucky enough to have met Julie Ertz before the game. She was sitting with a friend in the same section that I was in and had been nice enough to take a photo with me. The pair, who many have been describing as #relationshipgoals, may hold the title for the world’s most athletic couple. With two separate championships under their belts, it is undeniable that they are extremely talented people. Their support for one another has been well documented. A video of Julie’s reaction, as she had been unable to attend the NFC championship due having to play in a game with her own team, to hearing that the Eagles had made the Super Bowl went viral. A subsequent video of Zach tearing up when shown his wife’s reaction surfaced, causing them to be one of America’s favorite duos. 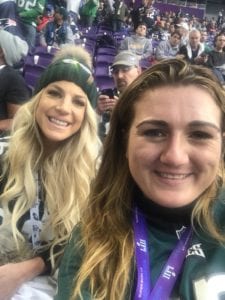 In the final few seconds of the game, Brady, desperate not to lose his MVP status, threw an impressive Hail Mary pass into the end zone but it was knocked down. The crowd erupted as green and white confetti was shot into the air. The Eagles had managed to pull off one of the greatest upsets of all time.

Foles, who threw for three touchdowns and caught another on Sunday, was awarded MVP. He became the first backup quarterback to win MVP since Brady himself had accepted the honor in 2001.

The celebratory parade is scheduled for this Thursday in Philadelphia, Pennsylvania.