Schlitterbahn New Braunfels Waterpark is the #1 Waterpark in the World for the last 19 Years.

Located on the banks of the spring fed Comal River in New Braunfels, Texas, Schlitterbahn’s flagship waterpark has 51 attractions on over 70 acres. Family-owned and operated, Schlitterbahn provides a staggering variety and miles of river rides, waterslides, and adventures from mild to wild. 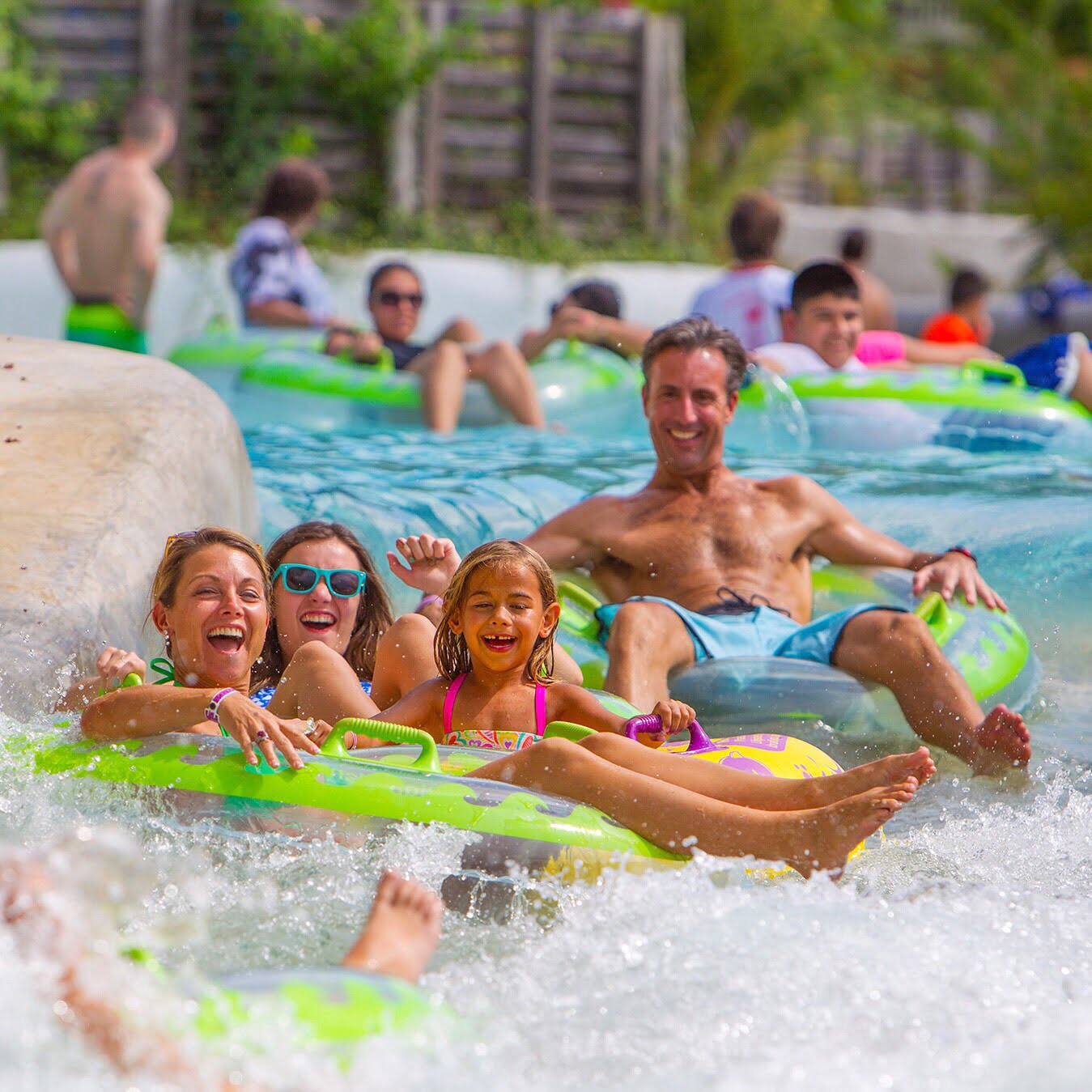 The Resort at Schlitterbahn New Braunfels is open year-round. Guests can enjoy the family excitement and convenience of a resort and waterpark during the summer and the beauty of a Hill Country Getaway year-round. With hotel rooms, one and two bedroom suites, Riverbend Cabins, Treehaus Luxury Suites, and vacation homes, The Resort at Schlitterbahn has a wide range of accommodations for any type of vacation. 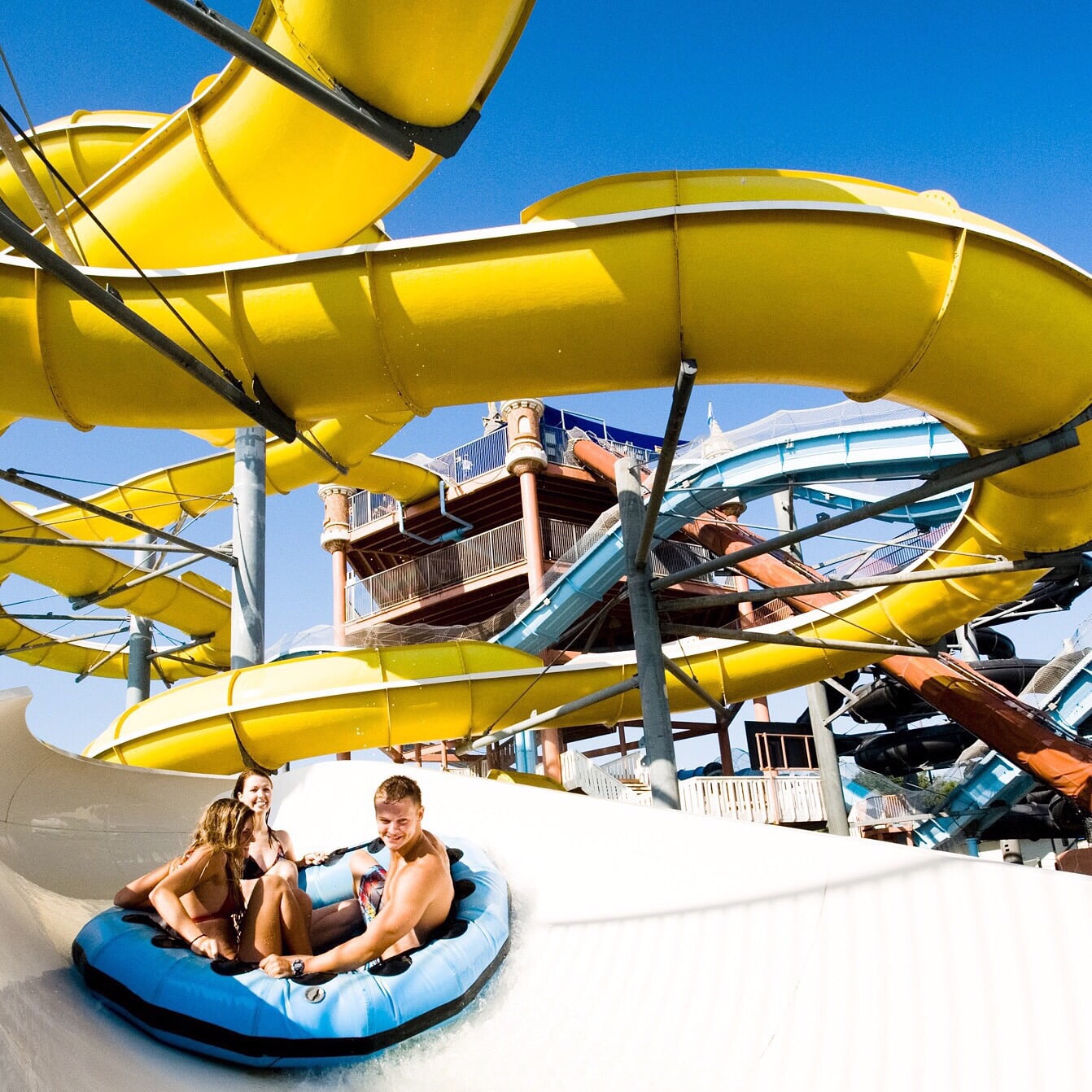 The Original Schlitterbahn: Home to the signature Schlitterbahn Castle, this section of the park uses springfed water from the Comal River. Nestled beneath a beautiful canopy of trees, this section of the park has eight tube chutes, seven kids’ play areas, a wave pool, and swim up bars with heated pools. On the wild side: the Down Hill Racer and the Soda Straws. On the mild side: the Raging River and the Congo River Expedition.
Surfenburg: Named for the world’s first surfing wave invented 26 years ago, the Boogie Bahn, Surfenburg is also home to the first uphill water coaster, The Dragon’s Revenge – invented 22 years ago. Also in Surfenburg: the Kristal River which circles Squirt’n Sliden, a giant kids’ play area.

Blastenhoff turns 21!: The most award-winning attraction in Schlitterbahn history, the Master Blaster, turns 21 in 2017. Using patented water injection technology, the Master Blaster starts at the top of a six story tower in Blastenhoff. (Two other rides also take off from the same tower.) Surrounding the “Blast Tower” is the Torrent Wave River – also invented 21 years ago – which combines an endless river with a wave pool for unlimited fun.

Overall, Schlitterbahn New Braunfels has four times the rides and attractions of any waterpark within 200 miles, and twice the number of attractions of any waterpark within 500 miles. Our naturally landscaped park with hundred-year-old oak, cedar, and cypress trees creates a completely different experience from the typical “hard-scaped” waterparks. We call those old school parks “cement, stairs, and slides” versus Schlitterbahn’s rivers, trees, and rides.

Schlitterbahn’s commitment to the environment is long standing. From the way the original park was designed to flow among trees, to the commitment to water conservation (98% of the water is recycled through filtration), to maintaining recycling containers throughout the parks, Schlitterbahn believes in sustainability. The development team, which builds our new parks and attractions at Schlitterbahn, constantly looks for ways to reduce, reuse, and recycle.

Schlitterbahn has expanded the number of available cabanas to include everything from BBQ palapas to super-sized cabanas suitable for ten people to share. Luxury cabanas with mini-fridges and TVs were successfully launched summer of 2015.

Schedule: Schlitterbahn New Braunfels Waterpark is open for Spring Break March 11-19, 2017 (only our Blastenhoff area), then open weekends beginning April 14, 2017 and daily beginning May 12, 2017 to August 27, 2017. The park returns to weekend operation September 2-17, 2017. Park hours vary throughout the season as does attraction availability. Online Schedule

Lodging Year Round: Schlitterbahn has a wide variety of resort accommodations open year-round. Admission to the waterpark for resort guests is included as a Splash, Sleep, Repeat Package while the waterpark is in operation.

Free Parking and Picnics: At Schlitterbahn parking is free for everyone. Schlitterbahn guests can bring a picnic from home (no glass or alcohol please). There is no charge for tubes, life vests or boogie boards.

Schlitterbahn, which means “slippery road” in German, was opened in 1979 by the Henry family with four water slides starting from a German-style tower. The tower was patterned after the Bergfried Guard Tower at Solms Castle in Braunfels, Germany – home of the original settlers of New Braunfels. The Henry family added the tower and the slides on a hill next to their resort, known back then as the Landa Resort. The family has continued to innovate, creating new ways to have fun with water that are imitated throughout the industry. More History

Hey! Do you know if they make any plugins to protect against hackers?

I’m kinda paranoid about losing everything I’ve worked hard on. Any suggestions?