In support of her recently released album Singular: Act I, singer/songwriter and actress Sabrina Carpenter is set to hit the road on The Singular Tour, her first run of tour dates for 2019. The 16-city North American headline tour kicks off March 2 in Orlando, Florida and will make stops in major cities such as Atlanta, Boston, DC, New York, Detroit and Chicago before concluding on March 25 in Los Angeles. (Dates and venues below).

Fueling excitement around the tour is Carpenter’s highly acclaimed third studio release Singular: Act I. V Magazine noted, “Carpenter is on the brink of superstardom the pop mega-starlet reaches new heights on her new album.” Released last November, the 8-track Singluar: Act I features Carpenter’s chart rising Top 40 hit Sue Me, a song she says is about prioritizing your self-worth. “What I can legally say, is that it’s inspired by real-life experiences.”

As previously announced, later this year Carpenter will release Singular: Act II. She’ll also take on her first leading film role in The Short History of The Long Road and will also be seen in the upcoming Netflix comedy Tall Girl. 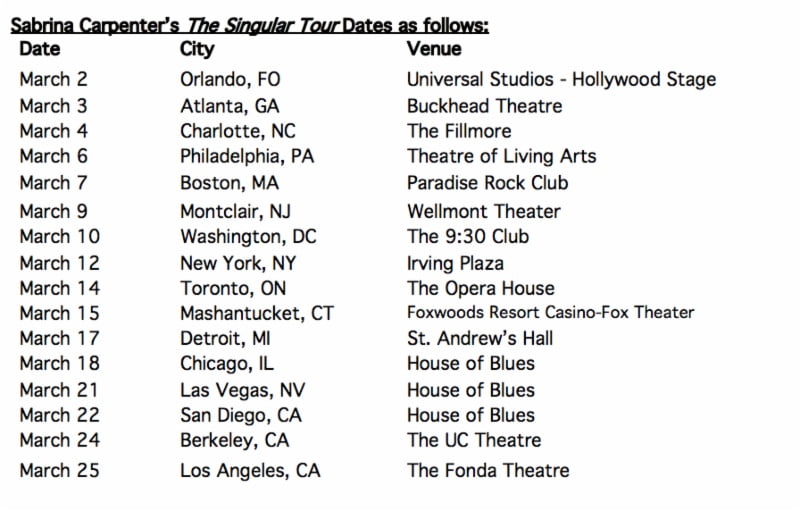 SINGULAR: ACT I stream it HERE