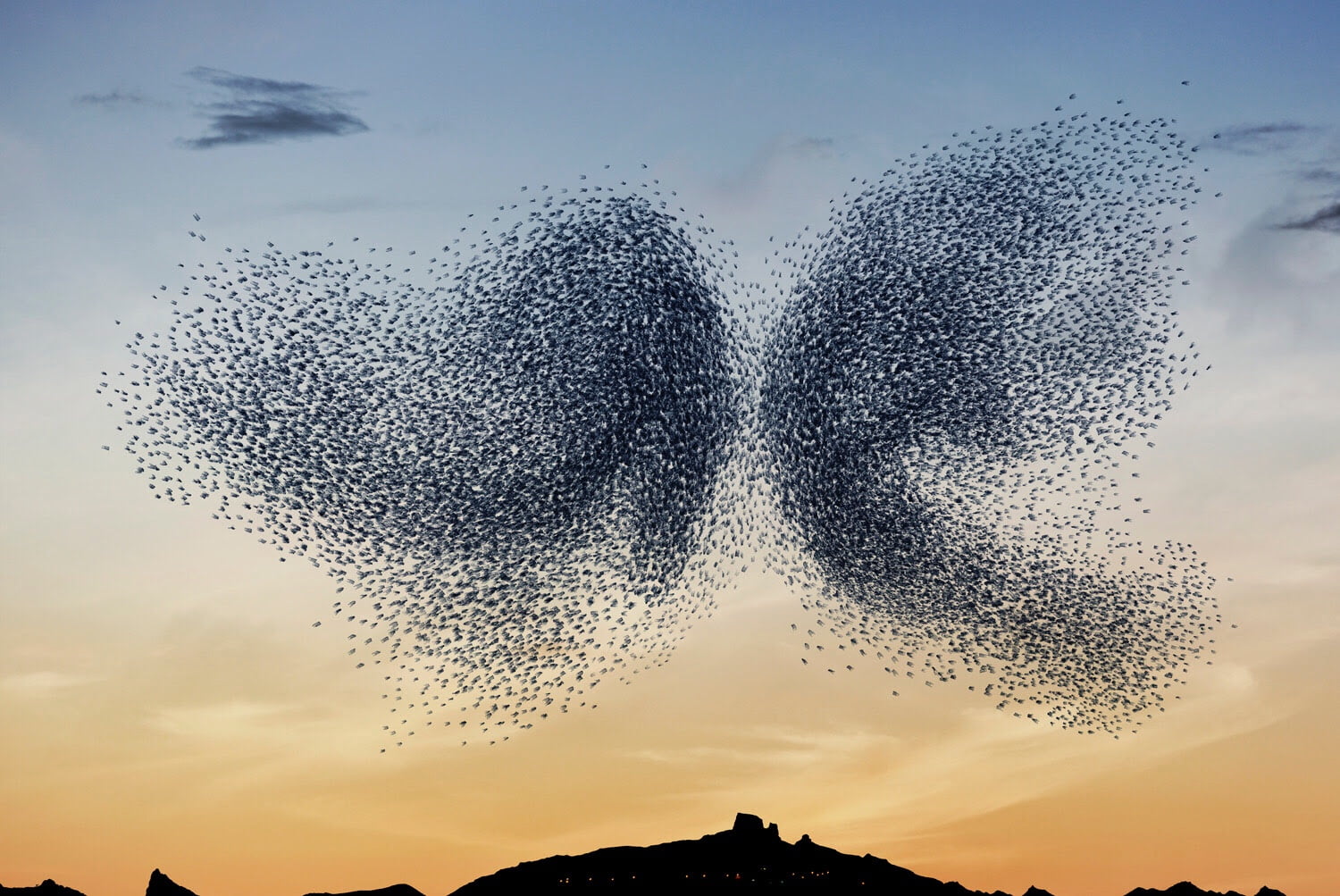 Born in 1979, Alain Delorme lives and works in Paris, France. Graduated from the Gobelins’s school, he then pursued a master’s degree in photography at the University of Paris VIII. The photographic work of Alain Delorme is particularly concerned with depicting the phenomena of normalization and standardization conveyed by our consumer society. The artist delivers photographs in graphic and colorful worlds oscillating between realism and fiction.

A distant rustle, puffs of air : a swarm forms and rises in the breeze, drawing elegant arabesques in a sky full of shimmering reflections of light. At first, the works of Alain Delorme capture the magic of the first fleeting beauty of a flock of birds, a Murmuration. However, this initial charm soon vanishes when the viewer takes a closer look, notices the clever deception, and discovers what is really behind the graceful flocks, the sometimes aquatic, sometimes calligraphic shapes : thousands of plastic bags, meticulously arranged by the artist, their massive presence threatening to asphyxiate the horizon. This work is located at the crossroads between various visual cultures and diverse artistic heritage, primarily cinematic : Murmuration seems like an improbable blend of the sight of the plastic bag which in American Beauty (1999) swirls around almost hypnotically, and the vision of The Birds in Hitchcock’s great classic from 1963. Both play with the reversal of perspective: the Master of Fear builds his plot on the inexplicable aggression of actually harmless animals, while the scene captured by the amateur filmmaker seems to unveil the beauty and delicacy of an otherwise ungainly object.

More generally, Delorme’s digital creations echo land art installations – presenting natural spaces that have been physically transformed in order to question their fate and vulnerability. In this work, Alain Delorme revisits accumulation, a recurrent theme of the new realists also leveraged in Delorme’s previous series – using absurdity to bring attention to the excesses of modern society.

By choosing such a common and universal artifact, the commentary takes on a global relevance. The context of the images is only hinted at, without explicit geographic positioning. The outline of our proud industrial societies, factory chimneys and power lines stand out as shadows playing against a sky that is bathed in a twilight that seems to announce the end of an era. Because the plastic bag poses a truly universal threat : it invades urban surroundings, litters natural habitats, paves seabed, and takes over deserts.

Through this “trompe l’oeil”, Alain Delorme steps away from any militant position, favoring the process of gradual awareness. He cuts out, assembles and arranges the elements of both a fictional and probable reality into one image that projects the sunsets of our tomorrow. 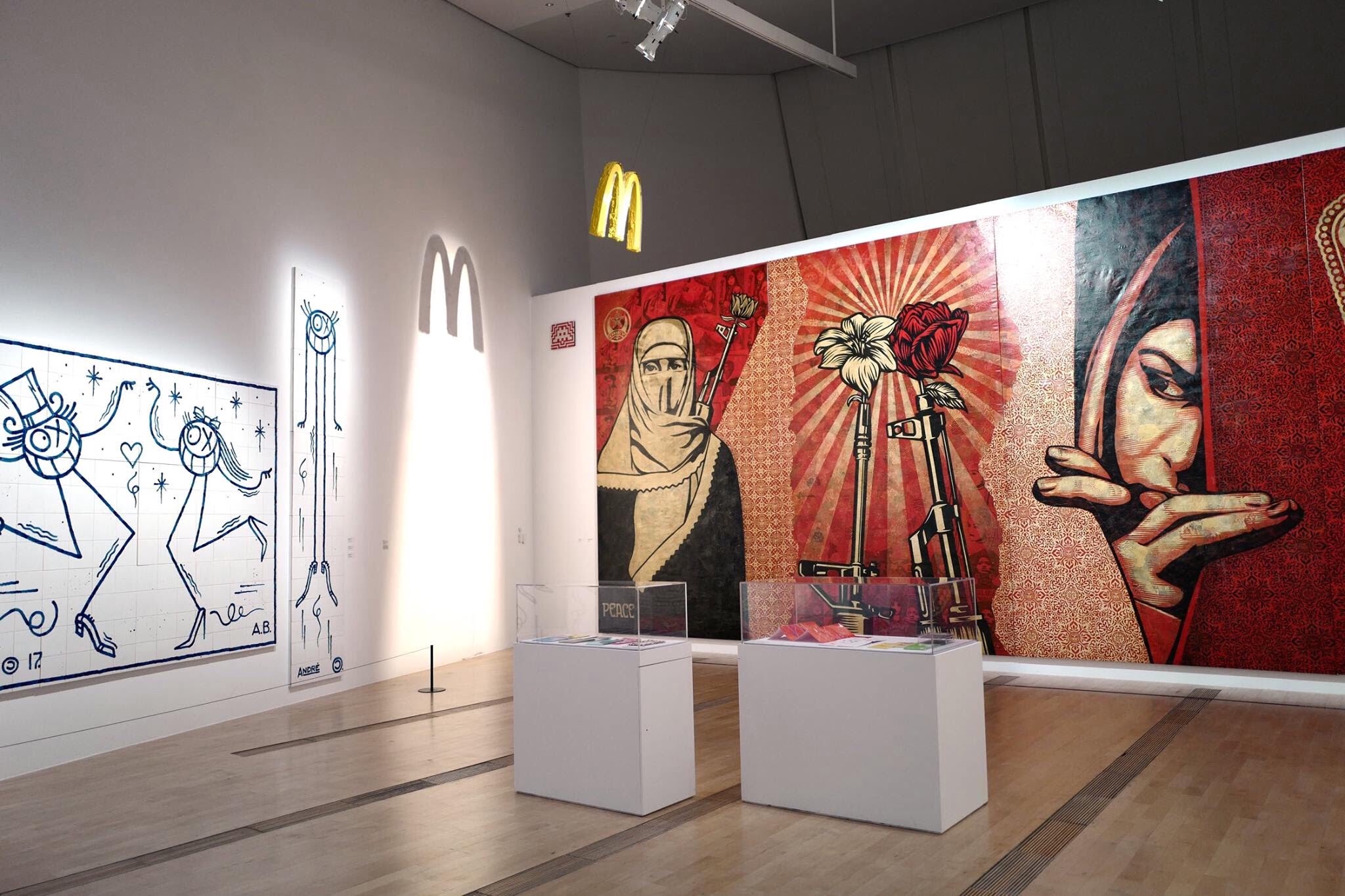 Exhibition Art From The Streets

ArtScience Museum – The world’s most iconic street artists present provocative works for the first time in Southeast Asia. From 13 January 2018, the galleries of ArtScience Museum will be invaded by some of the world’s top street artists in one of the boldest exhibitions to be shown at the museum in years. Art from the Streets traces 40 years of Street Art, from its countercultural beginnings to its extraordinary rise as a major phenomenon in contemporary art.

Curated by Street Art expert and gallerist Magda Danysz, Art from the Streets reflects the evolution of street art, charting the diverse artistic techniques employed by artists through the decades and showing how technology has created new expressive avenues for artists.

One of the highlights of Art from the Streets will be a series of live paintings and installations created on – site by iconic names from the field. Nearly a dozen artists, including upcoming new street art sensation, Felipe Pantone from Spain, have been invited to take over the galleries of the museum, creating new art works especially for the show. Illustrating the vitality of and diversity of the movement, the show also includes large – scale mural paintings, installations, videos, prints, archival material, drawings and sketches.

As well as bringing some of the leading international names in Street Art to Singapore for the first time, Art from the Streets also shines a spotlight on urban art in South east Asia. The show includes major new works by local and regional artists, including Speak Cryptic (Singapore), Yok & Sheryo (Singapore) and Eko Nugroho ( Indonesia ) .

“ArtScience Museum is thrilled to be presenting some of the biggest names in Street Art in this daring and provocative new show. What started out as acts of rebellion on the streets of US cities in the 1970s, has since expanded into a major international cultural movement. Art from the Streets shows how street art has evolved beyond the early days of graffiti and tagging, and is now recognised as one of the most important artistic genres of the 21st century. Our visitors will see how artists have restyled the look and feel of cities around the world, through captivating, thought – provoking works that range from small interventions, to massive murals. This is an exhibition that celebrates the energy and dynamism of the streets, by encouraging some of the most exciting artists in the field to transform our galleries into living urban artworks,” said Honor Harger, Executive Director of ArtScience Museum, Marina Bay Sands.

“Street Art is one of the most important art movements to have emerged in the 21st century. This exhibition celebrates the vitality of a movement many of us can witness as part of our everyday experience. It is very important at this stage to mark the 40 year history of the movement and recognize Street Art as a coherent and valuable art movement,” added Magda Danysz, a curator and writer based in Paris and Shanghai. Having witnessed the rise of graffiti and urban art from its beginnings, Magda Danysz became an expert in the movement, writing books about the history of Street Art, curating major institutional group shows and over 50 solo shows with artists including Shepard Fairey (aka Obey), Invader, JR and Vhils.