On Friday July 2nd, The Trolley Car Café, in collaboration with GoBelieve Culture Network and Music of the Covenant, hosted Keeping Believing: A Farewell Festival. The long-standing Trolley Car Café, a treasured establishment nestled on South Ferry Road in East Falls, Philadelphia, permanently closed on Wednesday June 30th. The café’s General Managers, Emily-Rachael and Jasmine, organized the festival in commemoration of the much-loved eatery, and many staff members and café regulars came out to revel in the festivities. Emily-Rachael, who is involved with both the café and GoBelieve, spoke with 360 Magazine about her original envisioning behind the festival.

Emily-Rachael explained that the café’s owner wanted to give someone the opportunity to do something new with the space as a last hoorah before closing. As Emily-Rachael is starting her own business and Jasmine is moving to Florida to be with family, the General Managers wanted to come together before parting ways and starting new business ventures.

“Trolley Car Café was involved in a lot of community service programs and non-profits. It was one of GoBelieve’s sponsors throughout the whole last year, and were one of the main reasons that [GoBelieve] was able to make it through coronavirus.”

Some of the specific charitable organizations that the Trolley Car has worked with in the past include GoBelieve, Helping Hands, local little league teams, and the East Falls Development Corporation. Trolley Car has hosted community events, such as the Fringe Festival, open mic events, and salsa nights. The adored establishment functioned as a community center in East Falls, bringing together local residents with lively entertainment and mouth-watering eats. Emily-Rachael continued explaining how the Trolley Car Café was a community landmark in East Falls:

“The Trolley Car was very much about the people. In honor of all that Trolley Car has done, we threw this Farewell Festival just to commemorate the good times.

We just had a GoBelieve concert during corona, it sold out on [the café’s] patio. The Trolley Car was our sponsor [then], it was really fun and great. Most of the people you see here [tonight] were there, but some had got turned away because of covid-restrictions. At the time, we could only sell 50 tickets. But [tonight’s] event sold about 67 tickets and there are 25 people on the guest list.

We invited all of the staff from the Trolley Car to come out and celebrate all that we’ve accomplished together. It’s been a fun time and we just want to bring some life and energy to the world now that its back open. [Farewell Festival] is a good chance for everyone to come out and see how important community is and how much you can do, even just with one restaurant.”

The community based event featured performers TooKnow, Gobbana, Goldmine, and Josh Ketchum. Aside from Ketcham, the event exclusively featured local musicians, many of whom were long time customers of the Trolley Car Café.

360 Magazine had a fantastic time at the Friday night festival, as we were immediately greeted by friendly event staff upon arrival. Though some rain caused a delay to the beginning of the festivities, the venue grounds featured family fun for all before the live music. Activities featured included a water balloon toss, dart games, giant connect four, ring toss, and a merchandise tent. The merchandize included t-shirt selections from performers Gobbana, TooKnow, and the event’s sponsor, GoBelieve.

As media at the event, 360 was afforded the privilege of attending as VIP guests. The VIP ticket included bottle service in an exclusive tent for other VIP attendees, a drink ticket for the bar, arcade tokens, and a festival photo station ticket. In the tent, covered tarps allowed us to stay dry from the participation in the beginning of the night. We enjoyed the VIP area’s large selection of alcohol, which included Fireball, Screwball, Rose, Jim Bean, Gray Goose, and a fruity rose. Outside of the VIP area, the festival’s bar served beers including Corona Premier and Yuengling Lager, hard seltzers, and wine. Additionally, house made cocktails, including rum punch and spiked blueberry lavender lemonade were available.

For dinner, we enjoyed a vegan vegetable risotto and chicken strips. The meal was warm, delicious, and most importantly, served with a smile as the community bonded over the restaurant’s famous hospitality and home-cooked entrees.

Once the weather cleared up, the festival began with a bang as the audience participated in interactive dances. Featuring iconic dance bops like the “Cupid Shuffle” and the “Wobble,” the event’s staff, guests, and even the performers themselves unleashed their moves on the outdoor dance floor. The tight knit community of the Trolley Car Café regulars stomped, shook, and boogied the evening away, creating a strong sense of community at the festival.

After the audience got their groove on, the first performer of the night TooKnow electrified guests with a suave, coordinated hip-hop performance. The four members of the group were adorned in matching outfits, and moved as one while performing with effortless flow and rhythm. The hip-hop group’s performance even featured some performance art, as members of the group engaged in a fake confrontation while on stage, illustrating the story behind their lyricism.

Following the evocative performance of TooKnow was rap duo Goldmine. With fluid flow and fresh freestyles, Brian Golden and Hue Hinton energetically took the festival stage. The rap group became involved with the fest as they had won a music competition hosted by Gobbana. Golden and Hinton exchanged bars during their performance, collaborating to create an auditory experience for Farewell Festival’s audience.

The third act of the night was Josh Ketchum, who had travelled from Connecticut to perform at the festival. The solo artist graced the event’s stage with his soulful acoustic guitar and poignant lyricism. His setlist included a passionate cover of Nirvana’s “Come As You Are,” stirring up a sense of 90’s nostalgia within the Farewell Festival’s audience.

Headlining the festival, the final performance of the night featured rap star Gobbana. The enthralling performer captivated guests with his dynamic ability. TooKnow again returned to the grandstand at the beginning of Gobbana’s performance, the two groups masterfully melding together as they delivered flowing choruses. Later in his set, Gobbana enraptured the audience independently with his constructed rhymes. During the final song of the rapper’s performance, he invited his girlfriend on stage as his illustrious lyricism told the story of their growing family.

The festival ended on a strong sense of family and unity- two sentiments that were echoed throughout the production of the entire night. Farewell Festival brought together energetic Philadelphians who are passionate about supporting their community, non-profits, and local musicians. While rain originally delayed the night’s events, the community dancing and music continued long into the evening, even after Gobbana’s performance. Reminiscent of a block party, Music of the Covenant’s Farewell Festival celebrated unity within East Fall’s diverse coterie of music lovers. As this festival was the final event to be hosted by the Trolley Car Café, it truly commemorated and encapsulated how the venue has long supported and brought together Philadelphians. 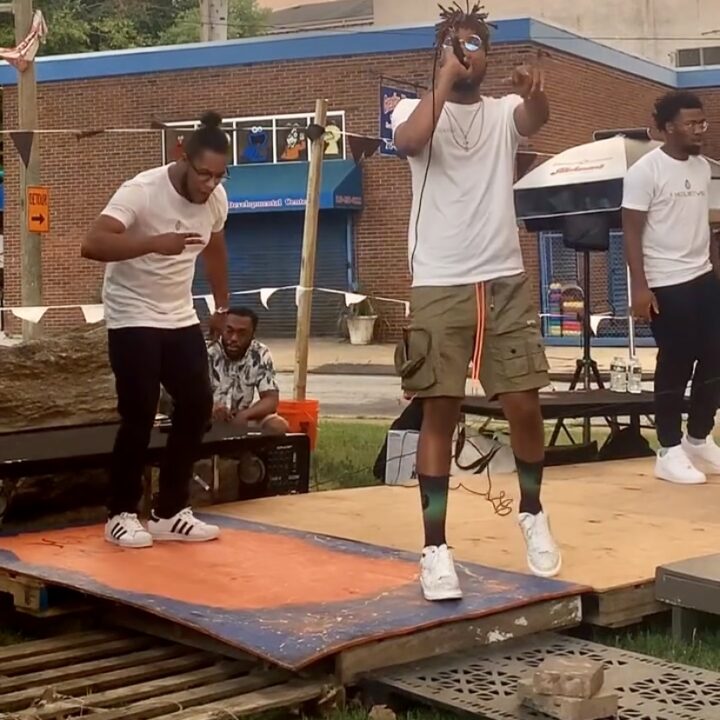