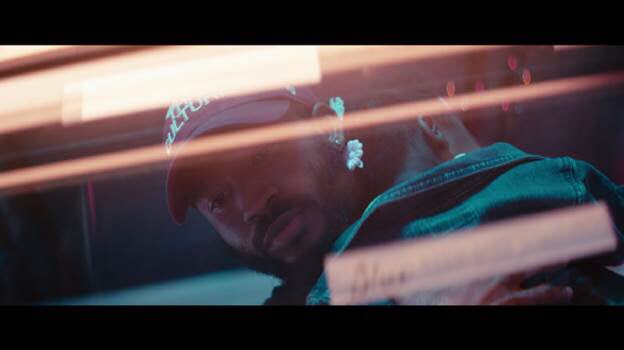 Born in West Charlotte, North Carolina, Luther “Lute” Nicholson’s hip-hop awakening happened at 7 years old. His older brother was heading off to basic training in the Army and entrusted him to look after his prized CD collection. A budding visual artist who spent all his free time drawing and doodling, young Lute had no interest in his big bro’s stash, but one day, curiosity got the best of him.

​“There was a treasure trove of stuff that I had never heard,” he recalls excitedly. “Outkast, Goodie Mob, Tupac, Biggie, Bone Thugs-n-Harmony, Pastor Troy, 3-6 Mafia… It wasn’t until I scavenged through all of it that I realized I had been missing out on a lot.”

​The year was 1996, and things were rapidly changing in the historically Black Beatties Ford neighborhood where Lute grew up. From the drugs being sold on the corners to the escalating police violence, the reality of his surroundings was becoming too much to bear. Hip-hop somehow helped the youngster make sense of it all.

​Lute was 13 when he decided to try his hand at writing some raps. Coaxed into it by his friends Jimmy Kelso and Allan whose older brother was already a popular rapper in high school, the entering freshmen created a crew of their own. “Early on, I was terrible,” he admits, “But the more I did it, the more I really liked this second outlet I had to express myself in ways that I couldn’t through art.”

​The trio practiced religiously; rhyming over instrumentals they downloaded from the J. Armz How To Be An MC series. They eventually recorded their first mixtape, burned a bunch of CDs and distributed them to their friends. “Everybody was feeling it,” says Lute. “We liked the recognition we were getting at school but at the time we weren’t thinking anything bigger than that.”

​It wasn’t until near the end of 12th grade that he began to take things more seriously. Kicked out of school for insubordination and struggling to complete his GED at a local community college, the misunderstood 17-year-old had no choice but to grow up quick. He opted to put his faith in his expanding skills and instead of hitting the books, focused on elevating his lyrical content and flow.

​In 2010, he met up with fellow microphone fiend, SchylerChaise, and discussed forming a Voltron-like collective of likeminded MCs who would support one another on the come up. Lute brought in his old pal Jimmy Kelso and SchylerChaise invited his buddy High I’m Ry. Together they became Forever FC.

​“It was a brotherhood,” Lute explains. “We were all independent artists working on our own projects but we had each other’s backs.” The four-man squad made enough noise during their five-year tenure to grace the cover of Creative Loafing Charlotte and garner national coverage from The Fader, Complex and The Source magazines.

In the midst, Lute dropped his first solo mixtape, West 1996, in early 2012. Recorded in a basement over beats he found on YouTube, the critically acclaimed project swiftly caught the attention of legendary hip-hop producer, Pete Rock, who retweeted it to his followers, and North Carolina rap star J. Cole, who tracked him down after discovering the tape on 2DopeBoyz.com.

“I named the project West 1996 because I’m from the west and I fell in love with hip-hop in 1996,” Lute reveals. “I recreated the Nas cover because I felt like this was gonna be my ’hood’s Illmatic. My perspective was just talking about growing up and the music I loved. I didn’t expect anything from it, but all of a sudden, out of nowhere, it blew up.”

Retweets and likes weren’t paying the bills, though. And with a baby on the way, Lute went underground, taking a menial job at the airport fueling planes to make ends meet. Almost three years went by before fans heard from the promising young rapper again. But when he finally resurfaced, he had the long-awaited follow-up to his debut in hand and ready to go.

“Everybody was asking where the music was so I decided to give people an idea of what I’d been going through the last few years,” he says. “I had a lot of things to write about and started creating songs on the job. I had also decided that this was gonna be my last project ever, so I went all out and poured my heart into it.”

Lute sent raw copies of West 1996 Pt. II to a few of his closest peeps and associates, including Dreamville filmmaker Scott Lazer, who passed it along to the boss. The night before the release date, Lute got a text from J. Cole saying he’d heard and loved the album and wanted to help take it to another level. The two spoke, and much to the dismay of his fans, Lute ended up holding the project.

That summer, J. Cole invited the talented wordsmith to join the Forest Hills Drive Tour for a couple of weeks “to see how things work” behind the scenes. His Dilla-produced head nodder, “Still Slummin’,” was included on the Revenge Of The Dreamers II Dreamville compilation, and by the end of 2015, it was announced that Lute was officially on Dreamville Records.

Although West 1996 Pt. II was already finished when Lute got signed, it was riddled with delays due to sample clearance issues. So the artist went back to the drawing board, tweaking song structures, swapping out instrumentals and redoing hooks to make it feel fresh. “It’s come a long way,” he remarks.

The contemporary throwback album features soulful production contributions from GRAMMY-winner Cam O’bi (“Ford’s Prayer” and “Premonition” feat. Earthgang), alongside Shiggy (“Home” feat. Elevator Jay and “Git Up’ feat. GQ), Elite (“Ambitions”) and Save Allen (“Morning Shift“, “Crabs In A Barrel“ and “Livin’ Life” feat. High I’m Ry). The single “Juggin’,” also produced by Save Allen, serves as a metaphor for how the artist has approached his 28 years on the planet.

“It’s about finessing your way through life,” explains Lute. “My mom was always the one always telling me to watch my circle, don’t get involved with the wrong crowd, and do things the right way,” he recounts. “Meanwhile my dad was like, ‘forget that, you gotta get out there to figure out how life works.’ I’ve always just tried to find that balance.”

One thought on "Dreamville’s Lute"