This past weekend, 360 Magazine attended the release of re-inc’s collaborative collection with Los Angeles clothing store Bodega and interviewed one of re-inc’s founders and CEO, Christen Press. You can find our coverage of the event as well as the interview below.

re-inc was founded by four members of the United States Women’s National team, Megan Rapinoe, Tobin Heath, Meghan Klingenberg, along with Press in 2019. The company’s mission revolves around sustainability, equality, and the creating of a global community, citing the reimagining and reinvention of the future as their primary tenets.

Their collaborator on this collection, Bodega LA, hosted the release of their “REUNITE” collection. Nestled between loading docks and former warehouses in the recently reopened ROW DTLA, Bodega is sequestered on the far end of the historic commercial complex turned upscale shopping mall. The store itself follows suit with its surrounding industrial environment, with many elements of the former factory preserved and combined with the namesake New York staple.

The event itself was based around the opportunity to shop the new collection in the Bodega store, as well as the opportunity to meet re-inc founders Heath and Press. Outside the store was a separate outdoors area where the festivities mainly took place, comprised of a DJ booth, a fruit stand, and a shaved iced stand. In addition, there was a small tent set up under which founders Heath and Press autographed posters and took pictures with fans.

The founders of re-inc will be playing at the 2021 Olympics in Tokyo this summer, something many of the fans present at the event were excited about. The US Women’s National Team is once more expected to be one of the dominant teams in the tournament. In 2016 in Brazil, Team USA was narrowly defeated in the quarterfinals round in a match against Sweden, though in 2019, the women won the FIFA World Cup in France.

For Heath, Press, Klingenberg, and Rapinoe, their identities as global athletes seem to be inextricable from re-inc’s mission and this latest Reunite Capsule. This collection is centered around not only a reopening of the world as vaccination numbers rise and coronavirus cases fall, but also, of course, their global competition this summer.

And so, in correspondence with this vast crowd of eager soccer fans and the desire to build a community around re-inc, one of the centerpieces of the event was a board where fans were encouraged to respond to the prompt “How will you boldly re-imagine the status quo?”. This feature of the event gestures to re-inc’s mission and core belief of “relentless and continuous reinvention”.

It seems as though re-inc likewise have intended to honor their mission through various production and charitable ventures. The clothes themselves are all said to have been made in woman-owned factories of recycled and organic materials. In addition, 1% of sales from the Reunited Capsule are to be given to the Partners in Health charity, who are striving for a more equitable distribution of the coronavirus vaccine. It is also worth noting that the collection was manufactured in factories on the East Coast of the United States.

The collection, which will be available at 9pm EST June 29th on their website, is comprised of a variety of colorful clothing with various accompanying graphics, seemingly paying homage to the trending resurgence of psychedelia. The garments range from sweats to hats and are in primarily earth tones. This event and the collaboration were similarly re-inc’s first foray into in-store retail. You can find the new collection HERE.

360 Magazine was able to speak briefly to Press about the inspiration behind the newest collection as well as plans for re-inc’s future. Read the interview below:

What were some of the main sources of inspiration for re-inc’s newest collection?

It was the Olympics, of course, and there’s a little psychedelia in it, alluding to our next collection, the Field of Flowers collection, coming out this summer. And it’s really inspired by that happy high and about reimagining what your health and prosperity is, and of course, coming together in a new reimagined way.

What was most important to you in the designing of this collection?

I think with every collection we design we want to get past just the surface and go really into emotions and humanity. I think that there is a tension in that because it is hard to convey something deep down, and I think we’ve done a really great job with that. 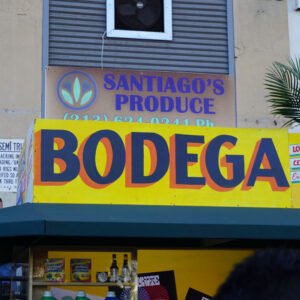 re—inc is a purpose-driven clothing company that was founded by world champions Christen Press, Tobin Heath, Megan Rapinoe, and Meghan Klingenberg in 2019. The company features gender-fluid designs that are ethically sourced and produced. re—inc’s founders encourage their fans to boldly reimagine the status quo and become change makers. Over the last two years, re—inc has partnered with over fifteen grassroots organizations to amplify their work and have donated over $90,000 to their causes.

Founded in 2006, Bodega has been a refuge and tool for a clandestine group of artists through the ideation and execution of creative endeavors examining the intersection of fashion, counterculture, community, and the arts.