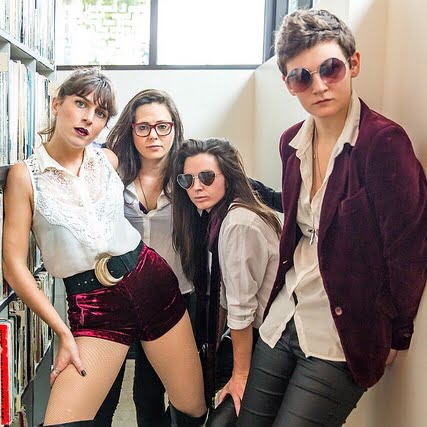 Get it HEREvia Stardog Records/Republic Records.

On the release of the EP the band wants fans to know:

Today we give to you…GREATEST TITS!

The taste tester, tongue teaser, titty twister, force to be reckoned with!

“I wrote this song during the 2016 political standoff. It was a moment when frustrations were high and women’s voices were once again being shunned, shamed and silenced.

Advances are a daily annoyance for every woman, especially around nightlife. Going out, women are always hit with some unsolicited remark. Gentle Frame is an anthem about being true to yourself, saying fuck you to the cultural pressures, and standing your ground. It’s about not feeling guilty when saying ‘No’ but instead feeling empowered. Gentle Frame is coy yet stern. Amiable yet assertive. Feminine and Fiery. Not being sexually objectified isn’t a feminist issue; it’s a human issue.

Gentle Frame is a reminder to

But this is just the tit of the iceberg, folks…

The new song “Gentle Frame” follows up the recently released “Torpedo Love,” which NPR called, “a song that’s slower than most of their catalog but retaining their trademark charisma – a flourish of flair to partner every slashing riff and volcanic chorus.” Check out the amazing video shot at the abandoned Satsop Nuclear Power Plant here!

Be on the lookout for more form Thunderpussy soon!

Thunderpussy. If Thor’s Hammer of the Gods from “Immigrant Song” landed in the hands of four wise, willful, and wild women? Well, it would sound something like Thunderpussy. The quartet—Molly Sides [vocals], Whitney Petty [guitar], Leah Julius [bass], and Ruby Dunphy [drums]—do the most rock ‘n’ roll thing possible and quite literally fuck up every rock ‘n’ roll stereotype you know to be true, piercing the halls of Valhalla in the process. The Seattle-based group turned into a quiet phenomenon with the endorsement of Rolling Stone and Pearl Jam guitarist Mike McCready as well as a string of already legendary performances under their high-waisted belts.