Kamiesha Garbadawala (b. 1977, Westmoreland, Jamaica) worked as a designer at fashion houses Ralph Lauren, Celine, Henri Bendel, and launched a celebrated line of handbags with Barneys, before she was compelled by a set of personal tragedies to begin anew. Garbadawala’s creative passion has reemerged and flourishes as the energetic and gestural works resulting from her meditative, stream-of-consciousness paintings, which she says:

“Explore the emotions which ebb and flow within [my] day-to-day as a wife, mother and creative. Amidst the constant noise that is New York City living, there is security found within a world created and controlled by my own hand.”

The Parsons graduate has exhibited as a part of SVA’s Summer Residency and Open Studios and Creative Mischief by the National Academy Museum, and has garnered praise and awards from ArtSlant (Showcase Winner) as well as Bombay Sapphire Artisan Series (Semi-Finalist, “Eden”). She was recently selected for a solo exhibition in New York City to benefit the Leukemia and Lymphoma Society. Garbadawala’s work can be found in private collections across the country and, most recently, at SCOPE Art Basel Miami Beach with ArtePonte (Booth B33). 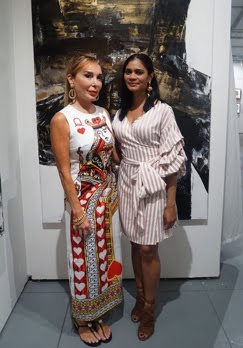