THIS WEEK, TWO PERFORMANCES ONLY: SEPTEMBER 28 & 30 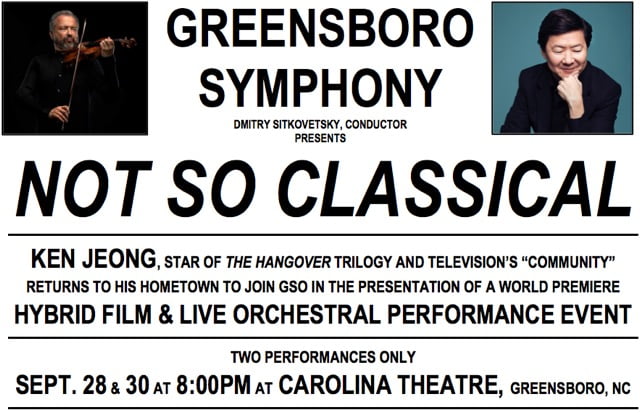 The internationally renowned Greensboro Symphony,(Music Director, Dmitry Sitkovetsky) launches their 58th season with an entirely new concept of experiencing classical music: Not So Classical – a hybrid film/live concert performance produced & directed by internationally acclaimed filmmaker David Donnelly. This world-premiere orchestral event takes place this week, September 28 and 30 at 8PM, at the historic Carolina Theatre. Not So Classical is presented as part of the Tanger Outlets Masterworks Series.

Through five film vignettes, Not So Classical will explore the human relationship with music and the impact it has throughout every phase of life. Footage includes interviews with dozens from Greensboro community, including Symphony musicians, Director Dmitry Sitkovetsky, board members, community leaders, young professionals in an exciting tale of Greensboro’s, and its Symphony’s, growth and transformation.”Not So Classical” also featuresactor Ken Jeong. Known across the country as the star of The Hangover film trilogy and TV’s”Community,” in “Not So Classical,” Ken talks about his experience growing up in Greensboro and his music education in his hometown.

“When you listen to a piece of music that feels like it was written just for you, but was composed in a different time and place, it broadens your understanding of what it means to be human,” says Donnelly. For the uninitiated, the presentation of classical music can often prove challenging. “We are trying to change that, one person at a time,” he says.

For this unique, world-premiere experience, GSO interweaves the video narrative with performances of four classical masterpieces: Franz Joseph Haydn’s Overture Lo special; W.A. Mozart’s Violin Concerto in G major; Frederic Chopin’s Prelude No. 15 for string orchestra in D flat major and Alexander Borodin’s Symphony No. 2. This 90-minute, no intermission performance will represent an unprecedented cinematic & musical experience for audiences, providing patrons a lens through which to view the music and a new way of understanding the classical repertoire.It is no coincidence this kind of visionary project coincides with the construction of the GSO’s soon-to-be new home: the $78 million Steven Tanger Center for the Performing Arts in downtown Greensboro.

“It’s exciting to see the Greensboro Symphony Orchestra do this live, hybrid musical show,” says Jeong. “You are really reaching across many generations to share this deep appreciation for music, and I think it’s pretty innovative.” Jeong indicated that his musical training impacts his career to this day. “When I think of my own acting, I think in terms of music and I think in terms of flow,” he says. “There’s a rhythm, there’s a music, there’s a cadence to it – whether I know it or not, we are always looking for that flow artistically, and I think that comes from my music background.”

GREENSBORO SYMPHONY ORCHESTRA (GSO). Founded in 1959, the GSO is the only fully professional orchestral ensemble in the Greater Greensboro area, touching the lives of over 100,000 Piedmont residents with its Masterworks, POPS, Chamber, Holiday and Education concerts. In its 2017-2018 Masterworks series, the GSO features talent from around the world, from newly minted competition winners to universally acclaimed celebrities. The POPS series continues to show the full diversity of the GSO by pulling from Doo Wop, Motown, Classic Rock and Broadway genres. Through its Chamber series, the GSO gives audiences a more intimate concert experience with the artists as they perform piano and string chamber works. The GSO also continues its Keep Kids in Tune educational programming, which serves over 50,000 children throughout the Piedmont Triad. Learn more about the GSO on their website.

KEN JEONG. Ken Jeong has established himself as one of today’s top comedic stars, best known as Mr. Chow from THE HANGOVER trilogy and Señor Ben Chang from the critically acclaimed series COMMUNITY. Since his film debut in KNOCKED UP, he has gone on to a number of memorable roles including ROLE MODELS, THE DUFF, TRANSFORMERS 3, and DESPICABLE ME 2. Jeong was most recently seen starring in ABC’s DR. KEN, which he also created, wrote for and was an Executive Producer. Learn more about Ken on his website.

DMITRY SITKOVETSKY.A magnetic creative force, Dmitry Sitkovetsky has made a considerable impact on every aspect of musical life and has been successful as a performer, creator and facilitator for over four decades. His enviable career as a violin soloist is documented in several dozen recordings of all major concertos and a wide selection of chamber repertoire. Also renowned as a prolific arranger, Mr. Sitkovetsky has arranged over 50 works by Haydn, Beethoven, Brahms, Bartók, Tchaikovsky, Shostakovich, Stravinsky, and Schnittke, as well as Bach’s iconic Goldberg Variations and Chopin’s Preludes.

As a conductor, Mr. Sitkovetsky has held artistic leadership positions with the Ulster Orchestra, the Russian State Orchestra, and Orquesta Sinfonica de Castilla y Leon. In 1990, he founded the New European Strings orchestra (NES), bringing together the most distinguished string players from the top European ensembles for special touring and recording projects. As a guest conductor, Mr. Sitkovetsky recently collaborated with Orchestre Symphonique de Montreal, Moscow Philharmonic, Tokyo Metropolitan Orchestra, China Philharmonic, among others. He has been the Music Director of the Greensboro Symphony since 2003. Learn more about Dmitry on his website.

DAVID DONNELLY. David Donnelly is an award-winning American filmmaker, writer and artist. He has written, directed, and produced numerous music videos, short films, and feature length documentaries. He has worked with some of the most brilliant talent alive, including NY times best-selling authors, Grammy award winners, Pulitzer Prize winners, and Hollywood A-list talent. His educational films are utilized in thousands of classrooms across North America and his paintings and conceptual art continue to garner international patronage.

In late 2015, Donnelly released his first feature length documentary Maestro starring Paavo Jarvi, Joshua Bell, Hilary Hahn, and Lang Lang. Since then, Maestro has been translated into ten languages and is airing on over 20 international networks spanning five continents. Most importantly it is utilized as a much-needed resource for music educators. Donnelly is also the author of the viral Huffington Post essay “Why Failing Orchestras are the Problem of Every American.”

Donnelly is the executive producer of the award-winning documentary Gabe, set for an early 2018 release. He is the director of Forte, Of the Americas, Take a Breath, and Nordic Pulse, all feature length documentaries focusing on the world of classical music and scheduled for international release throughout 2018 and 2019. In 2017 alone, Donnelly will film in over 15 countries. His work has been screened at some of America’s most cherished cultural institutions including the Whitney Museum and Curtis Institute of Music. He is the creator of the visionary hybrid film/concert Not So Classical, and is the founder of Culture Monster. Learn more about David on his website.

“NOT SO CLASSICAL” IS SPONSORED BY:

ADDITIONAL SUPPORT PROVIDED BY:
The Cemala Foundation, The Community Foundation of Greater Greensboro, Downtown Greensboro Inc, Greensboro Convention & Visitors Bureau, and through the support of ArtsGreensboro, thanks to the Joseph M. Bryan Foundation Special Needs and Innovation Fund.

For more information please visit the Greensboro Symphony at their website.