Let’s face it: we’re all reluctant and concerned to begin traveling again. Nonetheless, the world is doing its part, implementing tactics and precautions to combat the coronavirus during the reopening process. I encourage you to stimulate your mental health; what better way than to consider exploring during a weekend getaway. Take a trip out of town or stay local, depending on your comfort level. I challenge you, especially in times of heightened anxiety and isolation, to welcome new adventure and engagement. 360 Magazine, on behalf of Geiger & Associates traveled to Western Texas to experience all that the city of Lubbock has to offer.

“Everything’s bigger in Texas;” cliche as it sounds, this experience nevertheless made a grand impact. The three-day media tour refocused the lens of the “new normal.” Hopeful yet cautious lodging at Arbor Hotel & Conference Room, hospitality reminiscent of grandma’s house welcomes you with each encounter. Our first time in Texas offered a glimpse of what’s to come from a revitalized city that’s rich in spirit and overflowing with promise. Each day of our travels filled were filled with culture and inspiration: tours through local wineries, fine dining “Texas style,” and an inspiring visit to the cornerstone of the arts district.

Believe it or not, Texas is the fifth largest wine producing state in the US. Nearly 90% of the wine grapes in Texas are grown from the high plains, surrounding Lubbock. This robust main ingredient has been the means for families and will be for generations to come. For entrepreneurs like Steve Newsom and Tommy English, owners of English Newsom Cellars, their winery was our first stop. I had the pleasure of meeting Steve Newsom for a tour of their efficient facility and occasional event space, all while wine tasting, of course. Easy going and well-versed on the history of wine and business, Steve’s passion for their product controlled from dirt to glass is ideal. Finding ourselves newly indulgent in wine during quarantine and cultivating a palette, during 360’s visit we enjoyed the distinctive Picardan and Roussanne, while a personal favorite was the Cabernet Sauvignon for its woody chocolate notes. 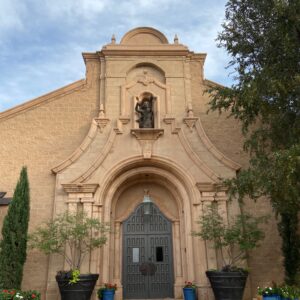 Having undergone a tremendous renovation, Burklee Hill is family owned. The Hill Family is the charming family which owns this vineyard, winery and bistro. Shortly after the pandemic hit, the operation was forced to close, but has since undergone a resurgence. The tasty lunch spread prepared was curated with wine pairings and included a sampler of various aged cheeses and premium cut Italian meats, collaged on a wood slab cutting board. Nestled with nuts and fruits, it made for the perfect Happy hour snack. Rightfully so, Burklee was featured in Texas Wine and Trail magazine. For its trendy and pristine interior, its spot is one to consider for hosting wedding celebrations for its Cathedral stature. As part of the revitalization of downtown, they are reaching new audiences by growing grapes on the Texas High Plains since 2002 on land farmed by the Hill family for five generations. 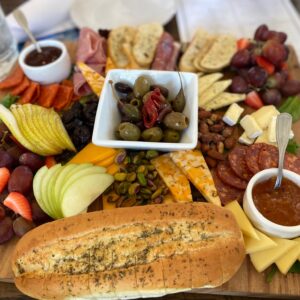 Like any successful business “focusing on what does well” says Kim McPherson makes entrepreneurship sound simple. Owner of McPherson Cellars, also known for being the historic Coca-Cola bottling plant in the 1930s. Restored, it is located in Lubbock’s depot entertainment district and has been transformed into a world class winery. What started as experimental vine planting in the 1960s, Kim’s father Clint “Doc” McPherson began growing grapes and by 1971 the winery became a reality. Doc was a founder and pioneer of the Texas wine industry, and the family business is respected as such. The cellar blossomed into a small but thriving operation focused on sustainably farmed, expertly crafted, small-batch wines exclusively from the backyard of the Texas High Plains. The renowned James Beard Foundation has twice nominated Kim as a semifinalist in the “Outstanding Wine, Beer, or Spirits Producer” category. McPherson Cellars wines have been recognized and awarded in several international wine competitions, as well. During these times, the future is thriving online through e-commerce allowing individuals to purchase on their website. Yet, visit them in person for a lovely patio view and a taste of wine that has won over 600 medals in state, national and international competitions.

Lubbock is expanding into a dining destination: from Spanish tapas and locally sourced dishes, to the traditional chicken fried streak and Chilton cocktail. A simple cocktail, pure as the West Texas sun, this drink is tart but refreshing. Make it yourself: 1 lemon, 1 1/2 oz Vodka preferably Lubbock’s Pinkerton Vodka. If not, Tito’s will do. Don’t forget the bubbles, Topo Chico or club soda of your choice. Legend has it that a Lubbockite known as Dr. Chilton requested this beverage at the local country club, and thus the staple drink was born. Inspired by the thriving art scene, the transformation of the city with color and creativity has also translated to its dining experiences.

What better breakfast than pies in Texas! Cast Iron Grill will satisfy your sweet tooth with their homemade pies. So good, locals know that they are sold out if they don’t order a pie before noon. Our guilty pleasures were the Cherry Banana split, the Millionaire, and the Texas delight! Satisfying to the sweet tooth, but not overpowering. In this current moment, baking has become an act of joy Clearly, owner Teresa takes after her pies: she is a treat to whomever she meets. An infectious big smile, with charm that will keep you coming back. She’s most proud of the growth of her ministry. Starting with 55 seats, she now has seating for over 200 at a time. She has learned that ministry doesn’t only apply to church. It happens every single day at the CIG, serving comforting pies and meals of the heart. 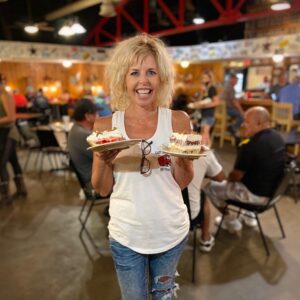 For a pick me up, look no further than Monomyth Coffee, a friendly and inviting craft coffeeshop. Started by Randell Jackson and his brother in June 2019, the first-time business owners are adapting to a pandemic. On a mission to make people happy, the brothers write quick encouraging notes on coffee cup sleeves for guests. In light of reopening, tables are monitored with marker mats indicating whether they are clean. Locals and the university community share this downtown converted antique shop, a gathering place for all kinds. A bright atmosphere makes it the perfect spot to enjoy a morning brew with cozy seating arrangements. The iced latte w/ almond milk and gluten free peach cookie were the best selections to start a morning on a day full of travel.

For lunch, craving BBQ we visited Evie Mae’s who has been listed as a top 10 best in Texas Monthly. After Arnis, the owner, was diagnosed with Celiac Disease and became Gluten free, it became necessary for them to prepare all of their meals at home to avoid contamination. Ahead of the curve, now all sides at the restaurant are served gluten free. Satisfying with comfort, Evie Mae’s is named after his daughter and started out in Arizona with an electric smoker on the patio. A chef at heart, Arnis took on the challenge of making his take on the reverse-flow to perfect the cooking process. Affectionately called the Black Pearl, it was completed in February 2014. “We want people to like the sauce but not be what they come back for” says Arnis. Holding tightly to the secret, we did learn it consists of three recipes, and the based is coffee. Serving pounds of certified grain feed angus daily, ribs tender to the touch, and smoked sausages, all cuts are prepared in the Central Texas style. 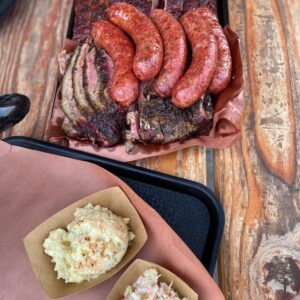 If you ever find yourself in Lubbock, Texas be sure it’s the first Friday of the month. Why, you ask? Lubbock is home to the first cultural arts district recognized by the state. A trail of fine art galleries and print studios to enjoy, as well as food trucks to complete the experience on these first Fridays. We delighted in exploring the trail despite it not being a First Friday, nonetheless it proved educational and inspiring to unearth a cultural area dedicated to the arts. A creative myself, I found the Charles Adams Studio most intriguing. It is an inclusive environment that is mutually beneficial for working artists, curators, galleries and students. The successful collaboration has led to four live-work studios open monthly, on the first Friday of the month, allowing visitors to connect with individual artists.

While visiting the cultural district, I encourage you to learn about Rock N’ Roll and a pioneer of the genre, Buddy Holly. Lubbock’s native son, there is a tribute center at The Buddy Holly Center which features a chronological exhibition on Holly’s life and music. It features Holly’s Fender Stratocaster guitar, glasses, stage clothes, photographs, letters, tour itineraries and much more. If that wasn’t enough, a documentary film on the life of the entertainer and his impact on the Beatles, the Rolling Stone and worldwide is available for viewing. 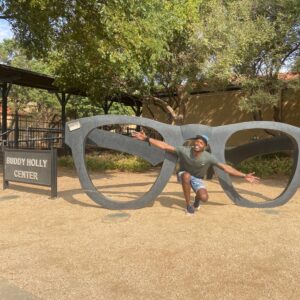 Buddy Holly statue & West Texas Walk of Fame: Formerly located in front of the Lubbock Memorial Civic Center, it is now located in the park on the northeast corner of 19th and Crickets Avenue, named after the band Buddy played in. Witnessing the bronze statue coming in at 2500 pounds, it is notable for its strong presence and the jubilance it brought when it was unveiled September 5,1980.

Lubbock High School: Where Holly attended from 1952 to 1955 and where he wrote an autobiography near the end of his sophomore year; “I have thought about making a career out of western music if I’m good enough, but will just have to wait and see that turns out”. After graduation in 1955, the school features a small exhibit in the main hallway that includes Buddy memorabilia.

Buddy Holly’s Home in 1957: 1305 37th Street where he and his family were living when “That Will be the Day” became the #1 record in the country. If visiting, simply drive by and please do not impose on those living in the home now.

Lubbock Entertainment / Performance Arts Association is proud to announce that the community vision for the Buddy Holly Hall of Performing Arts & Science is now becoming a reality. The Buddy Holly Theatre was built to accommodate and become a cultural hub of Lubbock while being the cornerstone of downtown revitalization. Expected to open Nov/Dec 2020, it is meant to become an inclusive event space for all acts of life. Furthermore, it hopes to fuel the economy for years to come. The hard hat tour explored the luxury suites and amenities that will be available but were delayed due to COVID-19.

Art and culture permeate throughout the city of Lubbock. The Public Art Program at Texas Tech University was initiated by the board In 1988. Yes, there’s an app for that, with the intention to enrich the campus environments and extend their educational and artistic mission. The Texas Tech public art collection features over 100 items displayed by some of today’s leading artists. It was named one of the top art collections in the US by the Public Art Review. The Agave Dreams piece in particular resonated with me because of the positioning and the color of choice of the figure; navy blue, kneeling and tending to the earth. Part of the biology building, standing 10ft by 12ft long, Agave Dreams was created by Julian Voss-Andreae in 2015. Completely made of triangles, simple but complex, it encourages us to question our attitude toward nature and web of life. A fulfilling viewing experience to anyone interested in art. 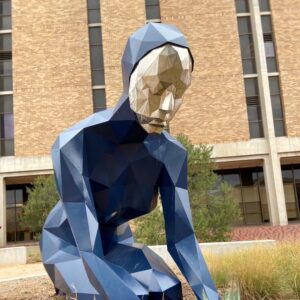 In the heart of Lubbock, Texas you’ll surely be smitten at the unmatched hospitality the “Hub City” provides. A pioneering spirit will certainly have permission to live and love Lubbock.