Mabel premieres an evocative new video for ‘Finders Keepers (featuring Kojo Funds)’, the unstoppably-infectious highlight from her acclaimed recent EP, Bedroom, which The FADER hailed as “her catchiest track to date”.  Shot on location in Portugal, the video hints at the promise of a part two, as well as new music, to come.
Watch the video HERE.
Check out Mabel’s cover story in London’s Evening Standard Magazine, in which she discusses childhood anxiety, being friends with Skepta and growing up as the daughter of Neneh Cherry and Massive Attack producer Cameron McVey, appearing tomorrow in print. 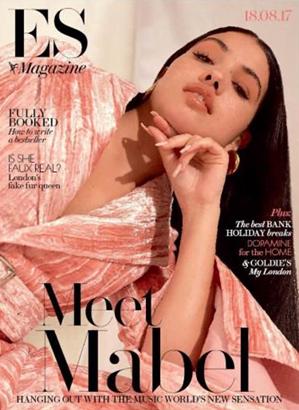 Recently surpassing 6 million Spotify streams and already playlisted at BBC Radio 1 and 1Xtra, ‘Finders Keepers’ fulfills an extensive period of personal and musical discovery for Mabel. She recently made her debut TV appearance on ‘Later…with Jools Holland’ and spent her summer performing at the likes of BST Hyde Park and Secret Garden Party, on top of selling out just her third ever headline show months upfront at London’s Village Underground. With a UK tour additionally confirmed for the autumn, including a date a London’s Heaven on October 11th, Mabel will next take the stage at this summer’s V Festival and Boy Better Know’s O2 Arena takeover on August 27th.
With her songs touching variously on independence, sexuality, control and escape, the enduring success of ‘Finders Keepers’ is the most confident step yet from Mabel, and the sound of British pop’s brightest young thing firmly hitting her stride.