“Diana DeMuth, a combination of old-soul songwriting and youthful optimism, brings a unique feel to her music that can sometimes feel like country-Adele while others a sound all to her own… there is much expected for DeMuth in 2020 and beyond.” – American Songwriter

“Diana DeMuth is something of an indie-folk fireball. The singer-songwriter has set the scene ablaze with her searingly honest songwriting that’s met by the richly poignant vocals through which she delivers it” – Pop Matters

Diana DeMuth shares a tearful, video for her single “Photographs” from her debut album, Misadventure, out now. The video provides an introspective look into a love DeMuth‘s romance with a woman that dwindled out. The face-to-face and heavy-hearted video shows DeMuth and her once-partner in the midst of a final goodbye and last embrace, closing out this chapter of their story together. Nicolas Sutton Bell (The Lumineers, Jeremiah Fraites) directed the video and invoked powerful visual metaphors to convey the intense emotions of the single. You can listen to Misadventure HERE. You can watch the music video for “Photographs” HERE.

On the song, DeMuth says, “Photographs is a very personal song for me, it’s about being in love with another woman – but I think the message rings true to any and all kinds of relationships. It’s really about having the courage to love someone, no matter what they are on the outside, and how these kind of rare loves can fall to ruins and leave haunting pictures tattooed in your mind’s eye.”

She adds, “This video was a very intimate and vulnerable one to shoot. It was important to me and my director Nick for my performance to reflect the raw and universal nature of a song about looking back on a love gone wrong. Being so close to another person after a year of isolation and singing directly at them ended up being an emotional experience for me and brought me back to the original feeling that inspired these lyrics.”

Director Nicolas Sutton Bell says, “With this video, I really wanted to portray the intimacy of the lyrics through the visuals. We thought it would be powerful to see two lovers facing off and letting the viewer place their own backstory on them. Diana carries the connection and history of these two lovers in the most amazing way, ending on the tears of truly letting a past love go.”

Expanding on the vision and story of the album, producer Simone Felice says, “Diana’s voice and her poetry always transport me to a teenage summer night, mischief and wonder down dark country roads, the northern lights dancing in the distance. Misadventure is the gateway drug into her world, I have a strong feeling it will be a long and winding road trip full of soul and mystery for years to come.”

With a few surprises coming, and stadiums that will soon be filled with DeMuth’s voice, melodies and story, 2021 will surely see her name stamped on new fan’s hearts. Stay tuned for more Diana DeMuth announcements, and be sure to check out the debut album, out now.

Restless and ready to pave her own way, Diana DeMuth has burst onto the singer-songwriter scene with an arresting perspective about life, love and self-discovery.

Growing up on the coast of Massachusetts, DeMuth was immersed in a bohemian upbringing where she moved from place to place with hippie parents. That same restless spirit inhabited DeMuth: she always had a sense that there was something out there beyond where she grew up and that existence. After seeing The Avett Brothers from the front row when she was 13, DeMuth was enamored with their raw performance and hunger on stage. In that moment, she knew she wanted to be an artist one day. So at 19, after going to college for one week, DeMuth left because she was certain music was her path. For the past five years, she’s focused on just that, spending her time traveling and playing small gigs around America, while waitressing and honing her craft.

In her travels, she spent time in London. Feeling aimless, she ended up writing “Hotel Song,” which would become the lead track of her forthcoming album Misadventure. “I just busted out of this hotel/ Took all of my belongings/ And I ran for it,” DeMuth belts in the opening line over stark keys. For DeMuth, the song was a breaking point: a door opening into a new chapter of her life. The track’s vagabond chorus evokes the liberating feeling of driving down an empty road with nothing but your dreams, destiny and the windows down. You can watch “Hotel Song” HERE.

At the same time DeMuth began looking for a producer who would be a match for her music. Through her love of The Lumineers and Jade Bird, she stumbled upon multi-platinum record producer Simone Felice, who in a serendipitous twist of fate, had also in his past worked on The Avett Brothers’ seminal album I and Love and You. (Things fell even more into place when Scott Avett ended up penning one of the tracks on the record with DeMuth, “The Young & The Blind.”)

To record her debut album Misadventure, DeMuth and Felice teamed up with Felice’s longtime collaborator David Baron at a Catskill Mountain house overlooking the Ashokan Reservoir outside Woodstock where the music flowed quickly and freely, and together they began to record her record. Inspired by everything from the Bonnie Raitt that was playing in her house growing up to The Lumineers and Brandi Carlile, DeMuth’s penchant for evocative storytelling and folk sensibilities shine through the 10-track record. And through those songs, DeMuth tells the story of her journey to self-discovery.

On “Signs,” she contemplates her identity and what her path will look like: “All my life I’ve tried my hand at reading the signs/ But I’m still blind/ Still counting the things I need in the night.” In-between the ringing of tambourine bells, DeMuth confronts the constant need for something more. On “Photographs,” co-written by Felice, DeMuth further dives into the human condition, reeling from the raw, devastation in the aftermath of a breakup. With “Rose of Nantucket,” DeMuth returns to the restlessness of “Hotel Song,” her smokey vocals chanting the chorus, “If you get lost in the howling rain/Cause some fucker changed that sign post to lead you astray.” You can watch “Rose of Nantucket” HERE. “Into My Arms” picks up where “Rose of Nantucket” leaves off with a more upbeat DeMuth flaunting her sassy lilt on the chorus. You can watch “Into My Arms” HERE. You can watch another song, “Steady Rolling,” HERE.

For DeMuth, who struggled with ADD growing up, songs were her doorway into prose and fiction. Misadventure reads as a novel with each song an illuminating chapter of DeMuth’s life. What she’s created is a musical tapestry of what it’s like to go through the cycle of losing yourself, fumbling in the dark and ultimately finding your way. 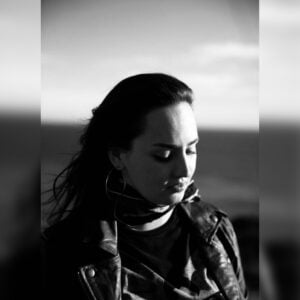