THE MOB MUSEUM DEBUTS “THE MOB ON TV,” EXHIBIT DEDICATED TO ORGANIZED CRIME IN POP CULTURE

The Mob Museum, the National Museum of Organized Crime and Law Enforcement, announces its newest exhibit: “The Mob on TV.” Comprising a collection of on-screen costumes and props from three iconic organized crime-based TV series – “The Sopranos,” “Boardwalk Empire” and “Breaking Bad” – the exhibit is on view in the Museum’s retail store.

While Mob movies dominated the twentieth century with blockbuster hits such as “The Godfather,” “Goodfellas” and “Casino,” the depiction of the Mob on the small screen gave rise to some of the most iconic television series of the twenty-first century. Both “The Sopranos” and “Breaking Bad” rank among the greatest series ever made, being named No. 1 and 3, respectively, by Rolling Stone magazine’s 100 greatest TV shows of all time.

Costumes and props in this collection include:

“Nucky” Thompson’s “Death Suit”: A three-piece suit worn in the series finale by Steve Buscemi, who played real-life Atlantic City crime boss Enoch “Nucky” Johnson in HBO’s “Boardwalk Empire.” The suit features a bullet hole where the character was shot. “Boardwalk Empire,” created by Terence Winter and executive produced by Martin Scorsese, chronicles organized crime in Atlantic City and beyond during Prohibition. The show’s five seasons (56 episodes) ran from 2010 to 2014.

Tony Soprano in Casual Mode: A costume worn by James Gandolfini, in his role of Mob boss Tony Soprano in the HBO series “The Sopranos,” during season five, episode two. “The Sopranos,” created by David Chase, premiered in 1999 and ran for six seasons (86 episodes). The stories and characters were inspired by real-life Mob crime families in New Jersey.

“Boardwalk Empire” Tommy Gun: This submachine gun prop was used by “Nucky” Thompson in season two, episode eight of “Boardwalk Empire.” In the episode, Thompson receives crates of Tommy guns destined for the Irish Republican Army, which is rebelling against English rule. In episode nine, Thompson travels across the Atlantic to deliver the guns, which are smuggled inside a coffin that presumably holds his deceased father’s remains.

On-screen Gas Mask: This gas mask was worn on-screen during meth-cooking scenes in “Breaking Bad.” The drug-making chemistry in the show was quite accurate, from the rudimentary production processes shown in the early episodes to the “super-lab” scenes in later seasons.

For more information about the Mob in pop culture, visit The Mob Museum’s blog HERE, which features numerous posts about that topic.

ABOUT THE MOB MUSEUM

The Mob Museum, the National Museum of Organized Crime and Law Enforcement, a 501(c)(3) non-profit organization, provides a world-class journey through true stories—from the birth of the Mob to today’s headlines. The Mob Museum offers a provocative, contemporary look at these topics through hundreds of artifacts and immersive storylines. Numerous interactive exhibits include a Crime Lab, Firearm Training Simulator and Organized Crime Today exhibit, as well as The Underground, a basement-level Prohibition history exhibition featuring a speakeasy and distillery sponsored by Zappos. This year, the Museum released an engaging new mobile app providing the ultimate guide to the Museum for visitors, in-depth education for those seeking more about the history of the Mob and law enforcement, and an innovative, interactive lookalike feature called Doppelgangster which matches user’s facial features with those from more than 800 Mob-related images. Since opening in 2012, The Mob Museum has accumulated numerous accolades, including being named one of TripAdvisor’s “Top 25 U.S. Museums,” one of Las Vegas Weekly’s “Twenty Greatest Attractions in Las Vegas History,” one of National Geographic’s “Top 10 Things to Do in Las Vegas,” one of “5 Museums for True-Crime Enthusiasts to Visit” by Oxygen.com, ” USA Today’s “Best Museum in Nevada” and one of its “12 Can’t Miss U.S. Museum Exhibits,” “A Must for Travelers” by The New York Times and one of “20 Places Every American Should See” by FOX News and Budget Travel magazine. The Museum is a two-time winner of the Mayor’s Urban Design Award for Historic Preservation and Adaptive Reuse and is accredited by the American Alliance of Museums. The Museum is open daily 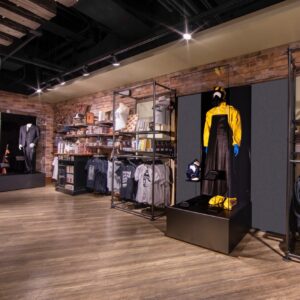 Photos courtesy of The Mob Museum